HURIWA came hard on the elder statesman for contemplating a tenure elongation for President Muhammadu Buhari. 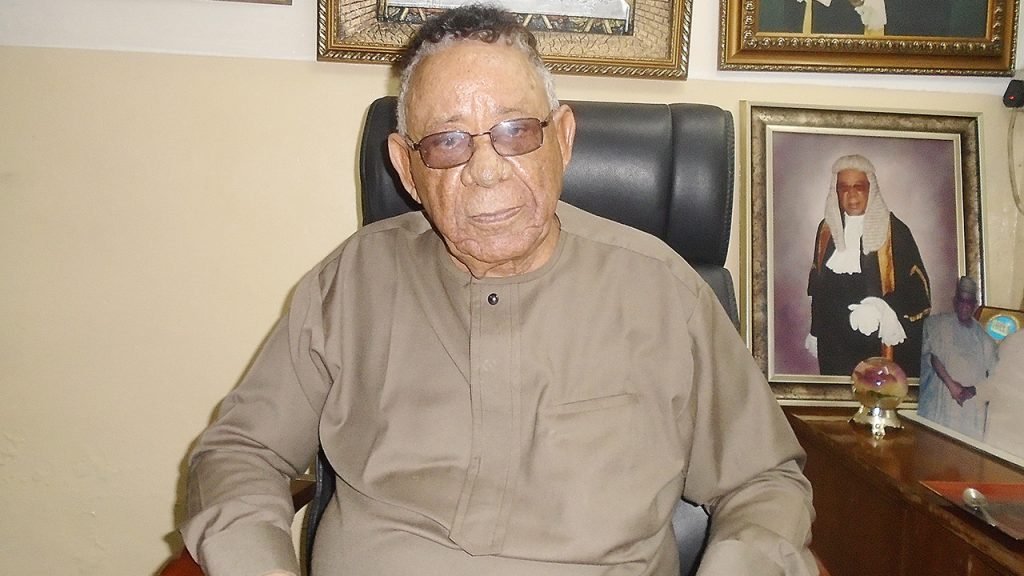 Robert Clarke, a Senior Advocate of Nigeria (SAN) has been accused of trying to destablize Nigeria with his call for an extension of President Muhammdu Buhari's stay in office.
Human Rights Writers Association of Nigeria, HURIWA while berating Clarke, asked him to concern himself with the type of legacies he wants to bequeath to generations unborn rather than play the role of a spoiler who is actively plotting to destabilise democracy with unrealistic and toxic proposals at such an old age.
HURIWA came hard on the elder statesman for contemplating a tenure elongation for President Muhammadu Buhari.
“We think that when elders talk they should show wisdom rather than make people begin to wonder what type of warped logic is being unleashed,” the group said in a statement signed by its National Coordinator, Comrade Emmanuel Onwubiko.
HURIWA recalled that the senior lawyer on Monday in Abuja said the President should serve for an extra six months to give him enough time to address the country’s security woes.
Clarke stated that with less than a year to the 2023 elections, there was not enough time to address the insecurity to ensure a safe exercise. Speaking on Arise Television programme, he noted that the constitution provided the President to extend his tenure for six months in the first instance if conditions were not ripe for an election.
HURIWA called on Nigerians in their millions to resist the subterranean plots by Buhari to extend his tenure by employing surrogates who would flood the media to inundate them with unsustainable and illogical calls for a third term for Buhari who has virtually become a dictator.
It asked Chief Clarke what he intends to achieve by causing civil war with such an absolutely irrational proposal.
“Those who want us the younger ones to call them elders and respect their old age because of what that concept means in a lot of African cultures and cosmological deduction as symbolising wisdom, then these elders must not speak like little minds and make proposals that may imperil the entire nation all because of the pursuit of some selfish ambitions for some alleged or perceived paymasters.
“President Muhammadu Buhari is the major cause of the escalation of violence and terrorism in Nigeria since the last 7 years that he came on board controversially through two very disreputable elections.
“Muhammadu Buhari’s administration gave birth to the insurgency of Fulani terrorists in the North West because of his nepotistic appointments of only Fulani heads of internal security institutions like the DSS, NIA, Immigration, Customs, Police, Prisons, civil defence.
“President Muhammadu Buhari in the last 7 years has left the compromised internal security chiefs who have looked on as Fulani terrorists have amassed assorted military-grade weapons of mass destruction and have shot down military jets.
“Is it by giving him 6 months that he will solve what he refused to resolve in 7 years? Even if you give Muhammadu Buhari till eternity, he can’t improve the security situation because he is grossly incompetent and is a bigoted Islamic religious extremist,” HURIWA said.
“So proposing any extension of tenure after his statutory two terms of 4 years each, is a nationsl suicide and we wonder what the intentions are for this anti democratic and anti people position being canvassed by someone who wants us to address him as an elder or is Mr Clarke in another planet these past 7 years?”
HURIWA dismissed Clarke’s positions as infantile and unreasonable just as the Rights group said rather than tenure extension, President Muhammadu Buhari should either be impeached for failing to protect the lives and property of Nigerians as canvassed by Section 14(2) (b) of the Nigerian Constitution as the primary duty of government or resign.
The rights group condemned unreservedly, Chief Clarke’s position and described it as retrogressive and not different from the anti-democratic action of Chief Arthur Nzeribe who went to the Abuja High Court then to secure the controversial annulment of the 1993 June 12th election adjudged by the local and international observers as “free, fair and transparent.”
HURIWA said if Buhari cannot solve the insecurity in 7 years, he can’t resolve it even if he is given two lifetimes to rule Nigeria.
It said the election of 2023 must go on come rain come shine or even full-scale war just as the group called on Nigerians to reject the position of Chief Clarke which will plunge Nigeria into civil war should President Muhammadu Buhari try to extend his tenure by even one day.
Top Stories