Drama As Police Nab Drone Operator Who Was Allegedly Filming And Spying On Church, Cleric’s House In Enugu


Narrating the incident, Reverend Eze said he was shocked when he saw a drone flying around his compound and on top of his church building. 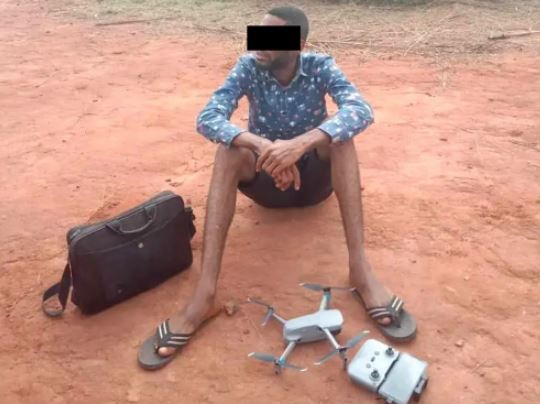 The officers of the Enugu Police Command have reportedly arrested one Michael Ali for allegedly spying on Highway to Grace Assembly Church premises and the residence of the overseeing pastor, Reverend Chikammadu Eze with a drone, according to SaharaReporters.

The suspect who hails from Aguibeje in Igbo-Eze North Local Government Area of Enugu State, was said to have gone to the church located at Alor Unor in Nsukka council area, hid in the bush nearby the church and filmed the entire compound, including the cleric's residential house before police operatives from Nsukka Division picked him up.

A police source told SaharaReporters that the incident occurred on Saturday, adding that the suspect claimed that he was filming the cleric’s home for a documentary, when he was interrogated.

The suspect who also said that he was working on the Nsukka landscape, when asked why he chose to stay in the bush to control his drone, told the police that he was still learning how to fly it.

He acknowledged that he made a mistake to have focused his equipment on the cleric’s home and church building, the source disclosed.

Narrating the incident, Reverend Eze said he was shocked when he saw a drone flying around his compound and on top of his church building.

According to him, he immediately began to monitor the drone only to discover that the suspect, Ali, hid in a bush close to his house from where he controlled the drone.

Eze said that he quickly alerted the police and mobilised his household who encircled the entire area to ensure that the suspect did not escape until the police arrived and picked him up.

He said, “Immediately I walked out of my bedroom, I was surprised to hear the sound of a drone hovering around my house and church building. I looked around and could not find the pilot.

“After some minutes, the operator started recalling the drone and I followed the direction only to see the operator (Ali) hiding in a nearby bush close to my church compound.

“That is how I caught the operator (Ali) and immediately called police from Nsukka Area Command,” he said.

Eze vowed to sue Ali, alleging that the suspect had evil intentions against his family and the church.

“If Ali has no evil intention as he is claiming now that he was doing a video documentary, why didn’t he inform me before taking pictures of my church, family as well as my picture with his drone?" he queried.