This is not the first time the government had announced total ban on okada operations in these areas, as there were no strict enforcement. 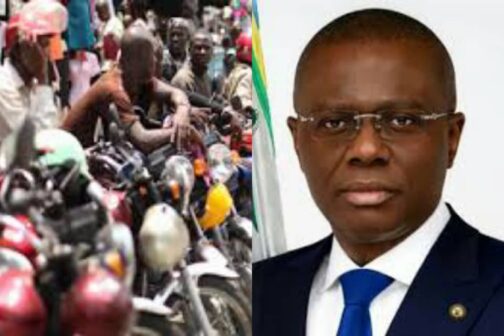 In response to the lynching and burning to death of a sound engineer in the Lekki area of Lagos State, Governor Babajide Sanwo-Olu has on Wednesday announced a total ban on okada operations in six Local Governments Areas.
He said the total ban will begin from June 1, 2022.
This is not the first time the government had announced total ban on okada operations in these areas, as there were no strict enforcement.
But on June 1, 2022, Sanwo-Olu said the ban this time around would be total and would be enforced.
The move was taking after irate okada riders burnt to death a sound engineer, David Umoh, in Lekki area of the state last week.
At a news conference at the State House, Ikeja, Sanwo-Olu, surrounded by the Deputy Governor, Dr. Kadri Hamzat, the Commissioner of Police, Abiodun Alabi and the Chief of Staff, Tayo Ayinde, listed the Local Governments to be Ikeja, Surulere, Eti-Osa, Lagos Mainland, Lagos Island and Apapa.
He said the Local Council Development Areas (LCDAs) under the six LGs would be affected.
There are nine LCDAs under the six LGs.
The governor charged all Divisional Police Officers (DPOs), Area Commanders and the Taskforce to enforce the total ban from June 1.
The governor said the ban in the six LGs was part of the phase banning of okadas in the state.
“This is the phase banning we are going to be embarking on so that others know that in a short while, either they get out or get something else to do.
“From the first of June, the LCDAs that are underneath them, we are going to publish them and list all of them, so we are giving the notice now.
“Begin to do your strategy now, from the first of June we want all the okadas to be completely off these major roads,” Sanwo-Olu stated.
Top Stories