However, the spokesperson for the Kaduna State Police command, Mohammed Jalige could not confirm the abduction. 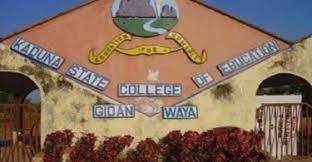 SaharaReporters reports that at least four students of the Kaduna State College of Education (KSCOE) have been kidnapped by terrorists.

SaharaReporters gathered that the terrorists abducted the students on Monday night.

A press statement signed by the spokesman for Kaduna State Student Union (KADSSU), KSCOE Chapter, Benjamin Fie, and made available on Thursday said, “The students were abducted on Monday evening at Mile 1 and the abductors have demanded a huge amount of money as ransom.

“It’s with a bitter heart that the Kaduna State student union (KADSSU) of the prestigious Kaduna State College of Education, Gidan Waya wishes to make it known to the college community and the public that four of the students were abducted.

“We want to use this medium to urge the college community and all the students to commit themselves, the school and their parents to prayers,” the statement SAID.

However, the spokesperson for the Kaduna State Police command, Mohammed Jalige could not confirm the abduction.

"We're not aware of the incident, but let me find out from the Area Commander around there and get back to you", Jalige said.