Olaleye, a 42-year-old native of Igbehin, also in Owode-Obafemi Local Government Area, said he was shocked to learn that the baby he thought was his was actually fathered by the herbalist who lives in the neighbourhood. 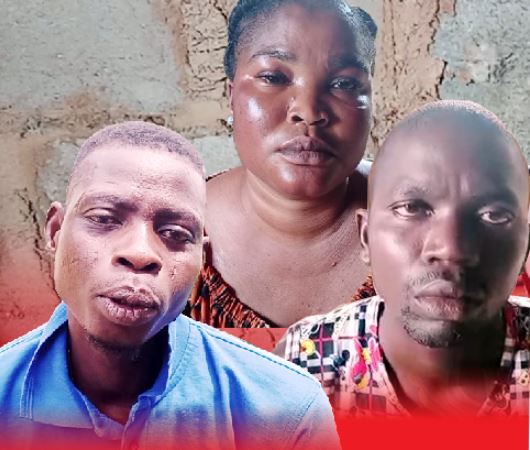 A startling report by The Nation shows that a really messy paternity row has broken out between a herbalist and a man whose wife was impregnated by the former.

The incident occurred at Malaka village in Owode-Obafemi Local Government Area of Ogun State. The distraught husband, Sikiru Olaleye does not now only have to grapple with the fact that his wife and the herbalist cheated on him, he is also at war with  the herbalist, Lamidi Ifaloba, over the  paternity of the  baby boy.

Olaleye, a 42-year-old native of Igbehin, also in Owode-Obafemi Local Government Area, said he was shocked to learn that the baby he thought was his was actually fathered by the herbalist who lives in the neighbourhood.

He said: “I had never seen anything like this before except in a movie. It happened that my wife Shadiat and I had a disagreement and she left for her hometown in Iwo, Osun State, with our son.

“I visited her hometown and tried in vain to persuade her parents to reconcile us. I even gave Shadiat’s parents N12,000 for her transportation back to my house, but she refused.

“So, I gave up on the possibility of her returning to my home and took solace in the belief that when the time is ripe, my son would come back to me since I had tried my possible best to make her return home.

“It was a shock when some people in our neighbourhood started mocking me that my son belongs to a herbalist in the nearby village called Malaka.

“His name is Lamidi Ifaloba, a herbalist whom my wife patronised and he actually made some fertility concoctions for my wife when she could not get pregnant for about six years.

“Ignorant of what was going on, I even took the baby to him for spiritual guidance on his (baby’s) future; a custom known in Yoruba culture as akosejaye, three days after my wife was delivered of the baby.

“Ifaloba would later reveal to one of my brothers in the community, Ismaila Jinadu popularly called Erosion, that he is the father of Korede, my three-year-old son.

“I was shocked and devastated and I could not pull myself together for a long time, especially when I learnt that a lot of people in the community already knew about the matter.

“I learnt that Ifaloba claimed to have named the boy Junior and even boasted that the matter would unsettle the community.”

“Even our neighbours did not know when she moved all her belongings out of our apartment.”

Olaleye said his wife could not have accused him of being impotent or use that as an excuse to engage in extra-marital affairs with Ifaloba which resulted in the controversial pregnancy and child.

He said: I have had three children from my previous marriage to another woman and my first child currently attends Abeokuta Grammar School.

“I am no longer interested in taking back my wife, but I want to have custody of my son, hence I am crying out to the public to dissuade Ifaloba from taking what truly belongs to me after his escapades with my wife. He cannot take my wife and also take my son.”

Responding, Ifaloba explained that he was lured to bed by Olaleye’s wife on a day her husband chased her out of their apartment during a quarrel and she rushed to his house around 1 am.

He said: “Actually, his wife ran to my house in the night and accused her husband of beating her over a disagreement.

“The weather was actually cold that night and I asked her to stay till next morning while I was busy fixing some things. But she told me that she suspected her husband’s sperm was not fertile enough to get her pregnant.

“As I tried to step out of the room, she pulled me to herself and asked me to make love to her, saying that she wanted to test her fertility.

“I was shocked and didn’t want to raise the alarm because I didn’t want the neighbours to know about what was going on between us, since I had once been falsely accused by some residents of doing something similar.  So I made love to her that night.

“She later came back and said the sexual intercourse we had resulted in pregnancy. I told her that I would take custody of the child from the pregnancy.

“I didn’t see her for some time and I started falling on bad times.  When I consulted Ifa oracle, it was revealed to me that the cause of my problem was the love child that was not in my custody.

“The oracle said I must take custody of my son for my life to witness a rebound. So, I visited her parents in Iwo, Osun State, and told them all that transpired between me and their daughter.

“Shadiat actually took me to her parents and they told me to calm down. They said that they were aware that I was the one that impregnated their daughter who had battled childlessness for almost eight years.

“They assured me that I would have custody of my son before long. I am the real father of the boy.”

In her response, Shadiat Akeem, a hairdresser, admitted that she deliberately forced Ifaloba to sleep with her on a night her husband chased her out of the house with a machete in order to prove that she had no fertility problem.

She said: “I didn’t give Olaleye’s son to another man. I was married to him for eight years and he subjected me to constant beating throughout the eight years of our marriage.

“We were regular guests at the nearby Owode Police Division where I reported him.

“One night about three years ago, I ran to Ifaloba’s home for refuge after my husband had beaten me mercilessly and chased me out of the house.

“While I was in Ifaloba’s home that night, I decided to test myself to determine whether I was the one with fertility problem or my husband, because I was childless for years.

“I forced Ifaloba to make love to me that night and I became pregnant afterward. I confided in one of my sisters, who is now deceased.

“Ifaloba initially asked me to move over to his house but I urged him to allow me to remain in my husband’s house until I would be ready to grant his request.

“My husband also made love to me twice and he became suspicious that he might not be responsible for my pregnancy, and that started generating issues between us.

“His sperm was watery, so I don’t think that the children he claimed to have with another woman before I met him even belong to him.”

Shadiat, 30, explained further that she decided to remain in her husband’s house until she decided to leave with the baby and gave him to his real father.

She said: “My husband, Olaleye, paid the hospital bill for my child’s delivery and threw a party to celebrate the baby’s naming and named the boy Kabir Korede.

“At a point, he questioned the paternity of the child, saying that he was suffering a reversal of fortune in his business because the child was a bastard.

“In 2021, he brought out a cutlass one night and wanted to hack me. Hence, I ran off to my parents in our hometown in Osun State that night.

“Ifaloba is the biological father of my son, not Sikiru (Olaleye).”

Recalling how the matter blew open, Ismaila Jinadu a.k.a. Erosion, whom Ifaloba had told that he was the real father of the controversial boy, said: “Six days before the recent Eid-Maolud festival, Ifaloba came to me and confessed that he was actually the father of Sikiru’s child.

“Three days later, I called him again and Ifaloba reiterated that he had visited Sikiru’s wife’s parents in Iwo, where he also bought a parcel of land.

“I subsequently told Sikiru and he was initially angry that I did not inform him early about it. He however confirmed from residents too that Ifaloba claimed he was the real father of Korede.

“Sikiru is my cousin and I cannot pray that bad things should happen to him, and that is the reason I told him about Ifaloba’s claim on the paternity of his son.

“I was the one who advised him to cry out to the public through the media so that he would not completely lose out since his wife has been taken by the herbalist.”