The 27-year-old French footballer admitted two offences under the Animal Welfare Act at a hearing at Thames Magistrates' Court. 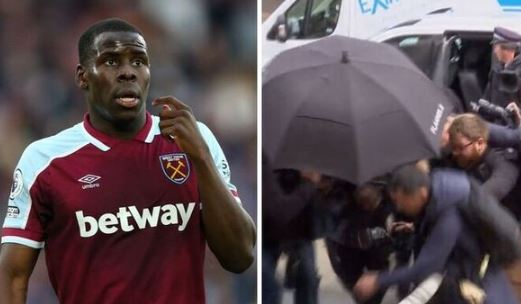 The 27-year-old French footballer admitted two offences under the Animal Welfare Act at a hearing at Thames Magistrates' Court.

Zouma's brother Yoan, who plays for Dagenham and Redbridge, admitted one offence after an RSPCA investigation.

Yoan, 24, filmed the incident, which was posted on social media. Sentencing has been adjourned to 1 June.

The brothers' addresses were withheld following a court order.

The court was told about disturbing footage of the incident, which was filmed at the West Ham player's home and posted on Snapchat with 'laughing' emojis by his brother on 6 February.

It was later seen by a woman who had been messaging Yoan, and she raised concern.

Zouma could be seen volleying the Bengal cat across his kitchen, before throwing a pair of shoes at it and slapping its head.

He admitted two counts of causing unnecessary suffering to a protected animal.

Yoan admitted one count of aiding, abetting, counselling or procuring his older brother to commit an offence.

The woman who saw the clip was so shocked that she called off their date, telling him: "I don't think hitting a cat like that is OK - don't bother coming today."

Stevens said the offences appeared to be carried out after the cats were deemed responsible for damaging a chair in the home.

"Kurt Zouma is determined to chastise or carry out some sort of retribution for the damage caused," she said.

"Since this footage was put in the public domain there has been a spate of people hitting cats and posting it on various social media sites."

The court heard the Premier League defender, who apologised for his actions, has since agreed for his two Bengal male cats to be rehomed.

An independent vet, who assessed the cats later and watched the video, said there were "no remaining signs of injuries" to the animals when he examined them but that being hit and kicked would have caused suffering while being chased would have caused fear or distress.

Defending the West Ham player, Trevor Burke QC said his client had been fined £250,000 by his club and lost a "substantial" sponsorship deal with sportswear firm Adidas.

Zouma had also not been picked for the France national team.

Burke said his client had been of previously impeccable character, and nine animal charities had benefited from his fine.

He said the defender had suffered abuse, including threats and racial slurs, which has "totally disrupted his life".

One other charge against each brother was withdrawn after their guilty pleas.

RSPCA chief inspectorate officer Dermot Murphy said: "It's never acceptable to treat an animal in this way and we were shocked when the video was first brought to our attention.

"What makes this case even more sad is the way the video was filmed and shared, making light of such cruelty.

"We hope this case will serve as a reminder that all animals deserve to be treated with kindness, compassion and respect, and that we will not tolerate cruelty by anybody."