the assailants who were in large number sneaked into the parish quietly before they began to shoot sporadically. 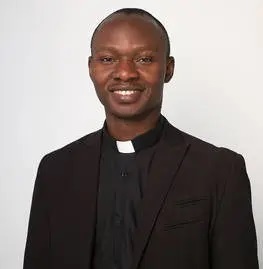 A photo of a Reverend Father kidnapped by bandits has surfaced online.
The bandits kidnapped the man of God in the early hours of Wednesday after attacking the Mai Kanbu Catholic Church Parish in Kafur Local Government Area of Katsina State.
It was gathered that Reverend Father Stephen Ojapah and three other persons were kidnapped from the parish.
According to a reliable source, the assailants who were in large number sneaked into the parish quietly before they began to shoot sporadically and eventually went away with the victims.
Aside the Mai Kanbu Parish Priest, Father Stephen Ojapah, another priest identified as Fr. Oliver was also kidnapped by the terrorrists, the source said.
When Vanguard contacted the spokesman of the Katsina Police Command, SP Gambo Isah to confirm the report, he said: “I am yet to receive this report. When I receive the details and it is true, I will get back to you.”
Top Stories