Sule lamented that his plan to start a business with the proceed of the crime was twarted when apprehended. 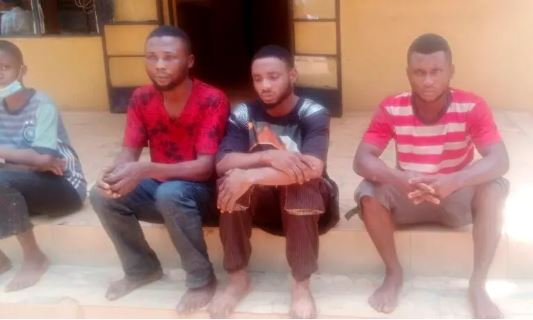 Mohammed Sule, a 23-year-old mechanic, who was arrested for armed robbery in Akure, the Ondo state has confessed that he resulted to crime to survive and start a business.

Sule lamented that his plan to start a business with the proceed of the crime was twarted when apprehended.

The Suspect who is from Kogi state was paraded by the Ondo state police command was arrested at Shasha area of Akure metropolis for robbing some houses within the axis.

In an interview, the suspect said he used to storm the residence of his victims alone with a cutlass and a fake gun.

“I got to Akure last month from Kogi State. On getting to Akure, I could not located my sister who I had planned to stay with.

“When I could not get anywhere to stay, I decide to go to Ogbese. When I got there, I was sleeping there inside the mosque. I was later pursue from the mosque.

“After I was chased from the mosque, I went to Shasha. When I was finding it difficult to survive, I started stealing.

“The very day I was caught, I had planned to raise money for business. I went to two houses and at one of them, I was attacked by a man in the house when he noticed that I was the only one. That was how I was arrested.”

Three of the robbers, Victor Bright, 21, AbdulRahim Mohammed, 22 and Friday Emmanuel, 27 were where apprehended in Owo council area of the state for snatching a boxer motorcycle and mobile phone.

The leader of the gang, Bright confessed that the robbery was their first operation..

Bright said that the motorcycle and the phone were sold for N130,000.

“I was arrested at Owo three weeks ago for snatching a boxer motorcycle. Last week Friday, we were transferred to SCID.

“After I and my friends stole the bike from a commercial motorcyclist who is an Hausa man, we sold it to one man at Elegbeka. We also sold the phone we stole from the okada man to the same person.

“I told the okada man to carry me from Ikare junction to another location in Owo.

“On getting to an uncompleted building, I put a rope on his neck. When he was trying to struggle, the three others came out from where they were hiding.

“We overpowered him and collected the bike but we did not kill him.

“We sold the bike and the phone for N130,000. The four of us shared the money. We have finished spending the money. I learned tailoring but at times I do engage in bricklaying job. That was my first time of engaging in robbery operation.

The spokesperson for the state police command, Funmi Odunlami, said that the suspect will be charged to court after the completion of investigation.