How Next Alaafin Of Oyo Will Emerge - Governor Makinde Reveals


The governor, who stated this while speaking at the state burial ceremony organised for the late Alaafin of Oyo, Oba Lamidi Olayiwola Adeyemi III, said the late monarch lived an impactful life. 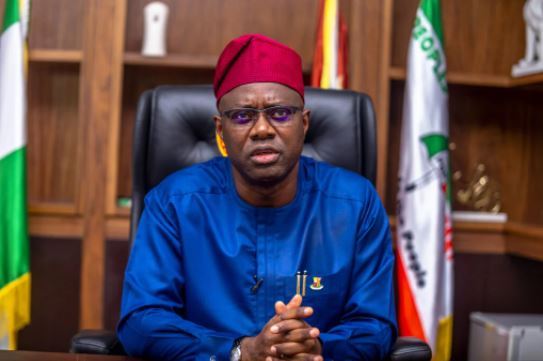 ‘Seyi Makinde, the Oyo State Governor, on Saturday, declared that the processes that would lead to the emergency of the next Alaafin of Oyo would be strictly based on the Alaafin of Oyo Chieftaincy Declaration, The PUNCH reports.

The governor, who stated this while speaking at the state burial ceremony organised for the late Alaafin of Oyo, Oba Lamidi Olayiwola Adeyemi III, said the late monarch lived an impactful life.

A statement by the Chief Press Secretary to the governor, Mr. Taiwo Adisa, quoted the governor as saying that the state lost an irreplaceable king and an encyclopaedia of Yoruba history and culture.

He said, “Today is a day of celebration for us as we are celebrating a life that was well-lived and impactful.

“Let me share one or two things with us on my relationship with the late Kabiyesi.

“People may feel we were not in good terms before his departure but that was not true. In 2015 when I was campaigning to be the governor of Oyo State, he was one of the few people that told me the truth.

“There was a particular night I came to meet him and he told me it won’t be possible for me to win that election because I didn’t have structure and trustworthy persons in each zone in the state.

“Truly, when the election came, I lost but it is on record that Kabiyesi was one of those who told me the truth.

“And when I became the governor, I came to meet Baba for some pieces of advice and he explained some certain things to me. I marvelled at how he got to know all those stories.

“So, Baba was an Encyclopaedia of our history and culture.

“I can only say that we have lost a king that is irreplaceable but we have to accept the fact that we cannot question God.

“God was merciful to Baba because it is not easy to spend more than 50 years on the throne of your forefathers.

“So, it is celebration of life for us today.

“Let me also use this opportunity to let our people in Oyo know that the process to select a new Alaafin will not go beyond the Alaafin of Oyo Chieftaincy Declaration.

“I have seen people who came to me and said that the first Alaafin gave birth to about 13 children and that only two out of them were recognised and this is an opportunity to bring in the others, and I asked them if it is in the Declaration. But they said it is inside a declaration that was not signed.

“I told them a new Alaafin will be selected only through the Declaration that was signed.

“So, on behalf of the government and the people of Oyo State, I want to greet all of us.”

Earlier, the Secretary to State Government, Mrs. Olubamiwo Adeosun, had in a welcome address, stated that the monarch was known for consistently blessing governments with quality advice on all issues.

According to her, the event has rightly been dubbed a celebration of life in view of the eventful life led by the departed monarch.

She said: “It is with great pleasure that I welcome you all to this unique event, which was put together to celebrate the illustrious life of our departed monarch, a quintessential personality, the Alayeluwa, Oba (Dr.) Lamidi Olayiwola Atanda Adeyemi III, the Iku Baba Yeye, who joined his ancestors on April 23, 2022.

“The state government has tagged this event a celebration of life and that is quite apt because we cannot all gather here in good conscience to mourn a royal father, who lived his life to the fullest and attained immortality by planting his memories firmly in our minds.

“Looking at the trajectory of this unique Oba, one would easily conclude that Oba Adeyemi was born to be a king. He had the vision to be the Alaafin from a young age and prepared himself for that great assignment.

“While he had the weight of the Alaafin stool thrust on his shoulders at a young age, he carried on with incredible poise and gait, stealing the shows in many of the public events he attended. It did not come as a surprise that he, in no time emerged the repository of Yoruba traditional history.”

She said that Alaafin Adeyemi III was an avid reader who was always in ultimate search of knowledge, adding that the late Alaafin was also a king who never lost sight of the sense of history that birthed the stool he sat upon.

Adeosun added, “His actions always depicted him as one who was ruling not just Oyo town, but Oyo Empire as exemplified by his ancestors, whose realm of authority as administrators of the famous Oyo Empire extended beyond what is currently known as the Nigerian nation.

“He carried himself as one monarch who was responsible for the welfare and wellbeing of the Yoruba people anywhere, they may be found, and the Yoruba nation.

“In that wise, Alaafin Adeyemi III never shied away from making public comments on issues he believed could discomfort his people at any point in time.

“He was a monarch who consistently blessed the governments with quality advice on all issues.

“This flows from his richly endowed wealth of experience. In one breath, one can say that Oba Adeyemi spoke truth to power without reservations and he was passionate about the growth and development of the Yoruba people.

“He was always turning up with invaluable contributions on every aspect of our administration’s Four-Point Service agenda, which encapsulates Health, Security, Education, and improved economy using the agribusiness value chain and Infrastructure development, through which the administration is lifting Oyo State from poverty to prosperity.

“We will continue to celebrate your unforgettable contributions to the development of our people as we pray that the Almighty God receives your soul to eternal rest.”