Buhari’s Award, Wike’s Promises Yet To Be Fulfilled To My Husband – Widow Of Man Who Drowned While Saving 13 Others Laments


Blankson, alongside his sisters on 28 July 2018, were in a passenger boat from Abonnema Wharf heading to Bakana. 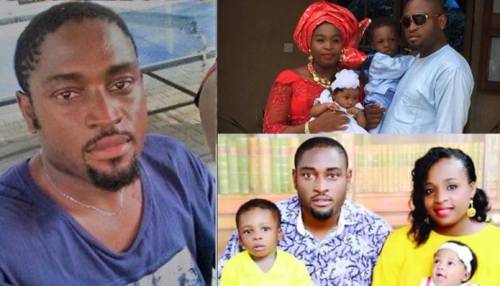 According to a report by SaharaReporters, Mercy Blankson, the widow of Joseph Blankson, a Nigerian man who saved 13 lives in a boat mishap in Rivers State, but died in the process, has lamented the hardship the family has been subjected to, after her husband's sudden demise.

Blankson, alongside his sisters on 28 July 2018, were in a passenger boat from Abonnema Wharf heading to Bakana.

However, the boat crashed into an object and eventually capsised.

Nigerians at the time hailed the heroic efforts of the deceased person to save the lives of others to his detriment, urging the government to ensure the bereaved family was well taken care of.

Weeks after the incident, the Rivers State Government announced the setup of an education endowment fund for the children of the late hero.

The State Governor, Nyesom Wike, while receiving Blankson's family at Government House, Port Harcourt, also gave immediate employment to the widow, Mercy Blankson, a graduate of microbiology and advised her to invest the money in a scheme that would best benefit the children and guarantee their future.

However, speaking with SaharaReporters on Wednesday, Mercy said the promises made by the governor were not fulfilled.

According to her, efforts to reach out to the governor, and his wife, Justice Eberechi Wike, have proved abortive.

The bereaved lady added that in October last year, President Muhammadu Buhari bestowed a posthumous award (Special Award for bravery and patriotism) on Blankson. However, there were no benefits attached to it for the family.

According to her, when she made efforts to reach out to the organisers of the award, it was alleged that some people had embezzled the funds meant for the family.

She added that the Minister of Information and Culture, Lai Mohammed, promised to give her a job but had yet to help her secure any.

The young woman lamented the difficulty in feeding and taking care of herself and the children. She, however said there are some good Samaritans who assist her with the children's upkeep.

She said, “Governor Wike promised some money, he even promised me a job, I tried to do a follow-up but nothing came out of it.

“There was a posthumous award for him last year by the President and not even anything was attached to it, not scholarship, job, not even a penny. So, when I tried reaching out to the organisers, they said it's like they've eaten the money, that they don't know.

“Lai Mohammed promised to give me a job, I tried to reach out to him, but nothing. The award was supposed to come with benefits, it was a presidential award but nothing came out of it.

“I wrote Governor Wike, his wife, I even chatted the wife via WhatsApp, I wrote to different persons but nothing has come out of it. Life has been difficult, sincerely, though there are still one or two persons that help but life has been difficult. You know what it's like training kids, upkeep and stuff, medical bills and everything.

”I'm the only one bearing the burden of these people. My husband was working for one indigenous construction company, and he does diesel supply, supplies in trucks before his death."