Sources said that save for the intervention of the Air Force personnel at Airport Corner, two of the security men allegedly involved would have been killed by a mob. 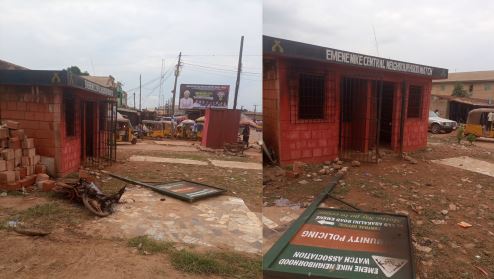 According to a report by SaharaReporters, the members of the Emene Neighbourhood Watch in Enugu East Council Area of Enugu State have reportedly killed a hawker at Orie Emene junction for allegedly obstructing traffic.

Sources said that save for the intervention of the Air Force personnel at Airport Corner, two of the security men allegedly involved would have been killed by a mob.

Although nobody seems to know exactly what led one of the security men to shoot the victim, when SaharaReporters visited the scene on Saturday, Air Force personnel were seen patrolling the junction as tensions were still high.

An eyewitness who spoke with our correspondent said he saw five security men beating the victim before one of them shot him three times.

The eyewitness, who spoke on condition of anonymity, said, "I don't really know what transpired because I was sitting here. But what I can say that I saw is that five members of Neighbourhood Watch were beating the victim in front of their office. Suddenly, one of them took a gun and shot him in the leg. As if that was not enough, he shot him again and the guy fell to the ground.

"The guy was crying and bleeding excessively by the roadside and they left him and went inside their office. Soon, people gathered to know what happened that warranted such a cruel action when there is police area command nearby where they could report whatever offence he (victim) might have committed."

The eyewitness said the security men rebuffed the people who were trying to know what offence the man had committed.

"So when entreaties to take the person to the hospital failed, a mob started attacking them. They burnt one motorcycle parked in their office and beat two of them to a pulp while three others including the one who shot the guy ran away.

"If not for the intervention of the Air Force personnel that came with several police detachments, the mob would have killed the two security men. So they took them away with the victim," the eyewitness said.

Another eyewitness told SaharaReporters that trouble started when the Neighbourhood Watch security operatives asked the hawker to pay N5,500 as a fine after allegedly seizing his wares.

"The guy, however, refused and asked what offence he had committed. He was exchanging words with them in their office, insisting they must give him back his properties.

"It is that argument that led one of the security men to shoot him while accusing him of showing a knife hidden inside his attire. Although, none of us saw the said knife."

The source, however, said that when the police came, they took the victim and the two local security men who were mobbed to the hospital.

He said, "Unfortunately, this morning we heard that the guy they shot died yesterday (Saturday) while the two security men were still in a coma. One of the security men is Chijioke, aka 'Owo.'"

Meanwhile, efforts to get the reaction of the Enugu State Police Command were unsuccessful.

The Command's spokesman, Daniel Ndukwe, did not answer when SaharaReporters called his mobile phone.