Please Help Me, I Want To See The Corpse – Portable Cries Out As Police Allegedly Demand N5 Million Over Okada Rider’s Death


Portable in an interview on Tuesday said that he was not responsible for the death of a motorcyclist hit by his car. 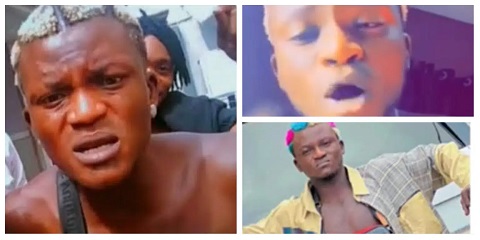 Nigerian musician, Habeeb Okikiola aka Portable has alleged that police officers are demanding a huge sum after his signee reportedly killed a motorcyclist in an accident.
Speaking on Tuesday, Portable said that he was not responsible for the death of a motorcyclist hit by his car.
The singer also stated that he was not in the car when the accident happened, stating that he was at his child’s naming ceremony when the sad incident happened.
He, however, commiserated with the families of the victim over the sad incident and promised to help financially.
In a video sighted online, Portable called for the help of his fans, stating he’s been dragged into the killing of the man.
Portable admitted that it was his newly signed artist that was involved in the accident and the police refused to release his car even when he showed up at the station.
According to Portable, there are claims that the man passed away and the Police are demanding five million Naira but he hasn’t been shown any corpse.
Watch video below: