The girl, who was the daughter of one late Philip Ugwu of Umuidu, went missing few days ago and was later found dead in a nearby bush. 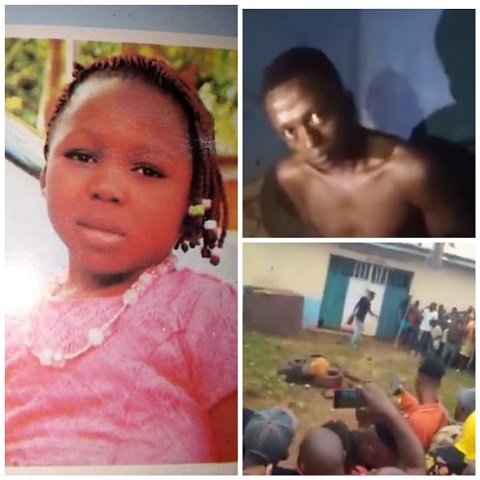 Two suspected ritualist have confessed before they were set ablaze by a mob in Enugu.
The incident happened on Monday, July 4.
The suspected ritualists were set ablaze for allegedly r$ping a 10-year-old girl to death in Ede-Oballa, Nsukka Local Government Area of Enugu State.
A source from the community told the Sun that the girl, who was the daughter of one late Philip Ugwu of Umuidu, went missing few days ago and was later found dead in a nearby bush with her eyes, br$ast and priv$te parts removed.
"The girl who was about 10 years old was initially declared missing and the next day she was found dead with her body badly mutilated," the source narrated.
“Her eyes was plugged out, her pr$vate parts were cut off and taken away by the suspected ritualists.
"Angered by the development, the elders and youths in the community went out of their way in search of what happened to the little girl.
"Along the line it was discovered that some members of the community have hands in the killing of the little girl, two person were arrested by the member of the neighborhood watch, but the angry mob overpowered them from handing them over to the police and set them ablaze,"
The source identified the suspects simply as Ifeanyi, a Native Doctor and Chidera noted that they are both from the community, stressing that they might have killed the girl and removed her body parts for money ritual.
“They confessed to the crime and pleaded for forgiveness but these any mob were adamant,” he added.
Another eyewitness from the community told the News Agency of Nigeria (NAN) that the incident had thrown the community into sorrow.
"The natives of the town have been worried that ritualists have entered the community. Only ritualists will r$pe a girl to death and remove her vital organs for their evil acts," the witness narrated.
"That was why when residents heard that the perpetrators of the dastardly act had been arrested by the Neighbourhood Watch, everybody rushed to its office. The crowd overpowered the security men and grabbed the two ritualists that killed the girl and set them on fire and watched them burn to death.
“It was the intention of the security men to take the suspects to the police but they were overpowered by the mob,” the eyewitness said.
The President-General and Councillor representing the community, Messrs Val Omeje and Hyginus Ogbu, respectively, confirmed the incident.
They also confirmed that the suspects hailed from the community.
Watch video below: