On the APC Muslim-Muslim ticket, the human rights activist said, those who are aggrieved at the development should express objections through constitutional means. 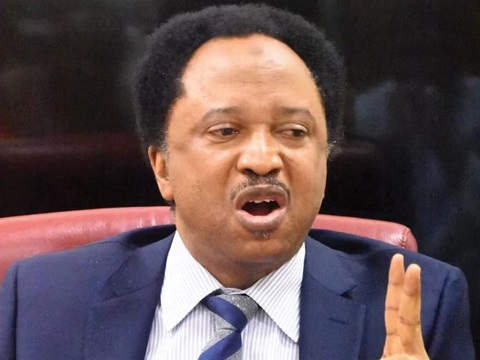 A former Senator representing Kaduna Central Senatorial district, Shehu Sani has reacted as social media users link Kashim Shettima with Boko Haram.
He said such an act is mischief.
Since Senator Kashim Shettima emerged as the 2023 presidential running mate to Bola Ahmed Bola, reports about his past dealings with Boko Haram terrorists have surfaced.
Many people have shared reports from Premium Times showing how a Boko Haram kingpin, Kabiru Sokoto was arrested at the governor's lodge when Shettima was the governor of Borno state.
Reacting in a statement on Monday, Sani said: “Those who are aggrieved over the Muslim-Muslim ticket of the ruling party have the constitutional right to express their objections.
“However, the remarks that trailed the ticket, including insinuations and allegations linking Shettima to the formation, growth and deadly destruction by the Boko Haram group is condemnable and mischievous.
Sani, who was a governorship aspirant on the platform of the Peoples Democratic Party (PDP), in Kaduna State, said though, he’s not a member of the ruling All Progressives Congress (APC), he witnessed the effort of Shettima at addressing insurgency when he governed Borno State.
“Shettima as the Governor of Borno State invested time, energy and the resources of Borno State in combating, containing and curtailing the activities of the terrorist group.
“Shetima has no hand in the abduction of the Chibok girls. He has done more than anyone in contributing and supporting the operations of the Army and other security agencies in protecting the people of Borno state and by extension Nigeria.
“As a stakeholder and former Chairman Senate Committee on the Humanitarian Crisis in the North East, I’m privy to the fact that Shettima attracted massive presence and intervention of international NGOs and donor countries to the humanitarian situation in Borno.
“I’m not a member of the ruling party, but the truth is that other than issues of religion, he is better qualified in terms of competence than many who were paraded.
“Religion is a sensitive matter in Nigeria; other than that, Nigeria’s most important challenge is security, Shetima’s experience can be useful and is very much needed.”
Top Stories