The female passenger whose face didn’t show in the video, made a passionate appeal for help, as they were left in the middle of nowhere. 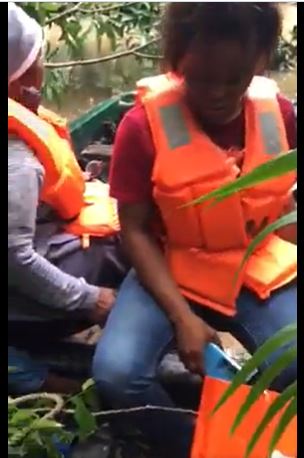 In what will come across as a really heartbreaking development, some unidentified gunmen have robbed and kidnapped passengers in Calabar.

The passengers who going from Calabar to Oron in Akwa Ibom state, were robbed just a few minutes after they left the Jetty in Calabar.

In a 30 seconds video released by one of the victims and seen by Vanguard, a female passenger raised the alarm while calling on security agencies to come to their rescue.

The female passenger whose face didn’t show in the video, made a passionate appeal for help, as they were left in the middle of nowhere.

“Please if you guys are seeing this video on my status , we need help, just raise an alarm, I am going for a wedding in Akwa Ibom when we were robbed, the gunmen came and took all the men( male passengers ) including the boat driver.

“We are just here with a Reverend Sister as well as other ladies , please we need help , we are across the sea , we are at the first branch from the pick up point( probably the Jetty),” the victim said.

S. O. S🚨...Just happening few minutes ago on the Qua River btw Calabar& Oron The occupants of this boat have been attacked&robbed by pirates, men on board have been kidnapped and boat left to maroon with this women on it. Pls help save their lives by retweeting🙏.. S.O.S🚨 pic.twitter.com/ykqSPN9SJZ

When contacted, the Police Public Relations Relations Officer, SP Irene Ugbo confirmed the incident adding that they have been rescued but was not clear on the number of persons who were rescued.

According to her, there was swift reaction from both the Nigerian Navy, and Marine Police who gave the Pirates a hot chase, forcing them to abandon their victims.

An impeccable intelligence source also told Vanguard that the affected boat and passengers have been rescued as the kidnappers took off when they sighted Navy gunboats.

The source further revealed that although they were yet to account for two other persons that were in the boat but gave assurance that they will be rescued as well because they were on a hot pursuit of the pirates.