Adeshina who was 24 years as at the time of the incident was instructed by one of his seniors in the mechanic workshop to follow a customer, Kingsley Omoreighe to Ijebu Ode to help start a faulty car and bring it back to Ibadan. 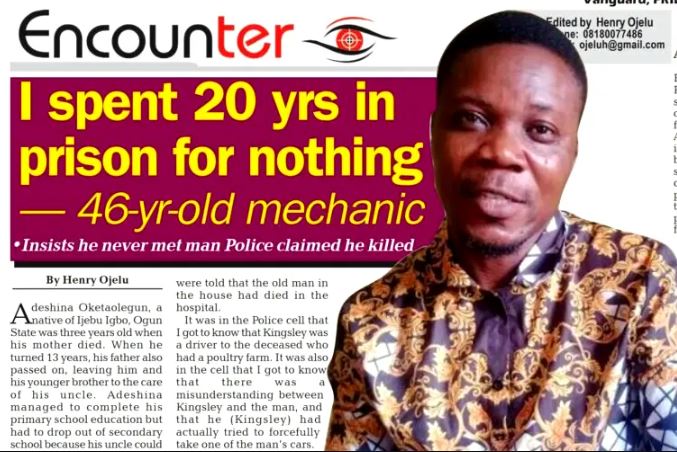 A Nigerian man, Adeshina Oketaolegun, has told the story of how he spend decades in prison for nothing.

Adeshina Oketaolegun, a native of Ijebu Igbo, Ogun State was three years old when his mother died. When he turned 13 years, his father also passed on, leaving him and his younger brother to the care of his uncle. Adeshina managed to complete his primary school education but had to drop out of secondary school because his uncle could no longer support his education. He later enrolled as an apprentice in a local mechanic workshop and was doing well until one fateful morning in 2002 when events that eventually led to his 20 years incarceration in prison started.

Adeshina who was 24 years as at the time of the incident was instructed by one of his seniors in the mechanic workshop to follow a customer, Kingsley Omoreighe to Ijebu Ode to help start a faulty  car and bring it back to Ibadan. In this edition, Adeshina narrates to Encounter, how that assignment landed him in jail where he spent 20 years of his life.

“Our mechanic workshop was located at Ojoo, Opposite NISSER, Ibadan. On August 27, 2002, one of my seniors instructed me to travel with one Kingsley Omoreighe to Ijebu Ode to bring his car which had a mechanical fault. I knew Kingsley very well because he often brought his father’s car to our workshop for repairs. On the instruction of my senior, Ojo Gogo, I took the necessary instrument and followed Kingsley to Ijebu Ikoto via Ijebu Ode. When we arrived at the compound, I was asked to stay outside the house while he went inside.

Not quite long, I started hearing noise upstairs and wondered what was happening. I didn’t know that immediately we entered the compound, someone had gone to call people to come and arrest Kingsley. By the time the local vigilante came, they met me downstairs and went upstairs and met Kingsley. That was how we were arrested and taken to the Igbeba Police Station, Ijebu Ode. On the third day, we were told that the old man in the house had died in the hospital.

Within three years, our trial was concluded and we were found guilty of the conspiracy and murder based on circumstantial evidence and sentenced to death on March 7, 2005 by Justice Ibikunle Desalu of the Ogun State High Court, Ijebu Ode. That day was the worst day of my life. When the death sentence was pronounced, it was as if a big tarpaulin fell on me. My body became very heavy.

On April 1, 2005, my lawyer filed an appeal against my conviction and the Court of Appeal commuted my death sentence to life imprisonment on attempted murder and conspiracy charge. The truth is that I never set my eyes on the man that died. I was further traumatized by the Appeal Court’s decision because I thought the court would exonerate me. Nevertheless, I was grateful to God because by the new judgment, I was moved from death row to the prison yard.

We were immediately moved to the death row cell at the Ibara Prison, Abeokuta where I met other convicts waiting for the hangman.  When I entered the cell, it was full of darkness, they could see me but I could not see them. I was guided by one of the inmates to sit down. We were eight in number in that small cell. The whole cell was always silent.

My death sentence was later converted to life imprisonment but I can tell you that three years on death row is like 30 years of torture. I had a close shave with death while on death row. For six months, I was on hospital bed. I used to think a lot and ask God why He brought me into the world to suffer.

When you are locked up over a crime you know you did not commit, it is enough to cause mental torture. The second time I had an encounter with death was when I was serving life imprisonment at Ijebu Ode Prison. I fell sick terribly but God saved me. I survived through the support I received from Christians visiting the prisons; they paid my medical bills and supported me with provision.

While serving life imprisonment, I learnt fashion designing. I sat for NECO and passed with distinction. I graduated from Bible schools with two different certificates. I had so many dreams when I was on death row but the most significant one was when I saw my father giving me a serious warning and he said: ‘Olorun ako e yo o,’ (God will deliver you). That word gave me hope that truly, God will deliver me. Prison is not a good place to go but is the best place to learn. Since my release after I was granted amnesty by the Ogun State Government, I am now like a new born baby. I am learning to crawl and walk again.  I have several options before me on what to do but I am counting on God and the guidance of the organisation that championed and facilitated my release, Centre for Justice, Mercy and Reconciliation, CJMR.

CJMR’s effort to save Adeshina

Encounter spoke to the Executive Director of CJMR, Pastor Hezekiah Olujobi who shed more light on his organisation’s effort to facilitate the release of Adeshina and many other inmates who had no business being inside the prison.  He said:  “When we hear any complaint of an innocent person, the first thing to do is to get the whole court proceedings for review. If we find such a case worthy of intervention, we will put forth our appeal to the Board of Prerogative of Mercy in order to have a second look.

“What we are creating is an opportunity for these victims to be heard. We are not pleading for a criminal to be freed but for the board to see the possible need to look into the case and recommend such a person to the Governor for amnesty through the Board of Mercy.

“In the case of Shina Oketaolegun, we obtained the record of proceedings from the High Court to the Supreme Court for review. We cannot conclude that an innocent person has been truly convicted or justice has been done to the criminal but on the ground that someone who was convicted on a murder charge was later commuted to attempted murder with life imprisonment, is what gave us curiosity to know further.

“These and many other points were put into  consideration and we forwarded our appeal to His Excellency, Dapo Abiodun through the office of the Attorney-General of Ogun State in 2020 but unfortunately, the pandemic struck and nothing could be done that year. The late Reverend Omotola Oyediran, nee Awolowo, during her lifetime was part of signatories to the Board of Prerogative of Mercy on behalf of Shina Oketaolegun. I also want to say here that through the joint effort of the office of the Welfare Correctional Service, Ijebu Ode, we were able to achieve this great success in Ogun State.”