They said the situation has affected their movement, thereby making it impossible for them to exercise freedom of movement in search of their daily livelihood. 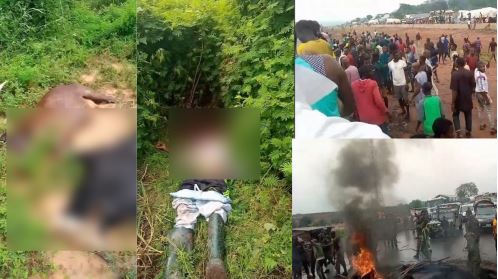 According to a report by SaharaReporters, some angry Northern Nigerian youths have gone on rampage in Abia State.

The youths blocked a major highway in Abia State to protest against incessant attacks and killing of herders and cows by unknown gunmen.

The youths in their hundreds condemned the recent killing of scores of cows and a herder at Lokpanta cattle market.

They said the situation has affected their movement, thereby making it impossible for them to exercise freedom of movement in search of their daily livelihood.

Some residents of Abia State recently demanded the immediate relocation of the Regional Cattle Market at Lokpanta which they alleged provides cover for criminal herdsmen behind incessant kidnappings in the area.

The government a few days ago embarked on the demolition of brothels and shanties at the regional cattle market, saying that they now serve as hideouts for criminals terrorising people around the area.

It also said that the demolished shanties had since been converted into a haven for hard drug traffickers, adding that a kidnapper was recently arrested in one of the shanties.

In February, some unknown gunmen invaded another cattle market at Omumauzor in the Ukwa West Local Government Area of Abia State, killing eight traders from the North and slaughtering over 20 cows.