One of the protesters, Awolusi Bisade, said the police tried to frustrate their efforts by releasing the suspect. 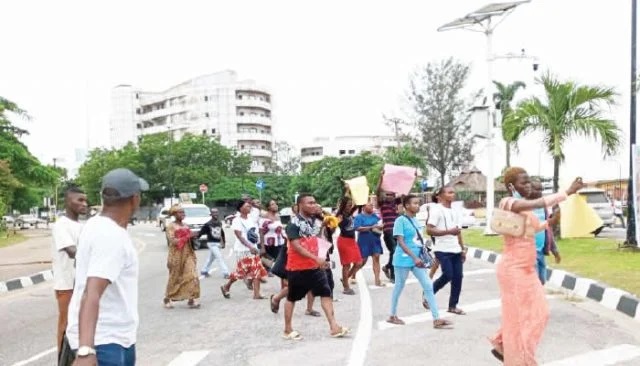 Some house seekers who were defrauded by some developers in Lagos have begged the Governor of Lagos state, Babajide Sanwo-Olu to come to their aid after police released the suspects.
According to Punch, no fewer than 70 prospective tenants who were allegedly defrauded by two developers, on Friday, protested at the Lagos State Governor’s Office to demand that the culprits be brought to book.
The house seekers paid different sums to the developers, Oluwasegun Adewara, and one Okeowo, for a house on Zamba Street, Lawanson, in the Surulere area of the state.
Things, however, took another turn when they got to the house and discovered that the number of prospective tenants outnumbered the apartments in the one-storey building.
Punch learnt that one of the developers was caught by the victims and handed over to the police.
However, it was alleged that the police released him even when he had yet to refund the prospective tenants.
The victims, during the protest at the governor’s office, carried placards with different inscriptions, including, ‘Police failed us’, ‘Say no to fraud’, ‘We want justice’, ‘Sanwo-Olu help us,’ among others.
One of the protesters, Awolusi Bisade, said the police tried to frustrate their efforts by releasing the suspect.
Bisade said, “We are crying out to the Lagos State Government to help us get justice in this matter. The developers duped us and the police are not helping at all.
“Some of us are currently homeless and we don’t have anywhere to turn to. We are begging Governor Babajide Sanwo-Olu to come to our aid and help resolve this matter.”
Another victim, who identified himself as Jacob, said the police collected money from them to apprehend the suspects but failed to do so.
He said, “We paid the police to help capture the developers which they failed to. But instead, they released one of them whom we captured and handed over to them.
“By the grace of God, the suspect has now been re-arrested and taken to the SCID by our collective efforts.
“We are begging the government to help us look into this and help us get back our money from the developers.”
The Lagos State Commissioner for Information and Strategy, Gbenga Omotoso, said the victims should file proper complaints to the Special Adviser to the Governor on Housing.
“And our people should do proper background checks if a developer is registered with the Ministry of Housing before carrying out any transaction with the person,” he added.
The state Police Public Relations Officer, Benjamin Hundeyin, could not be reached for comment as of the time of filing this report.
Top Stories