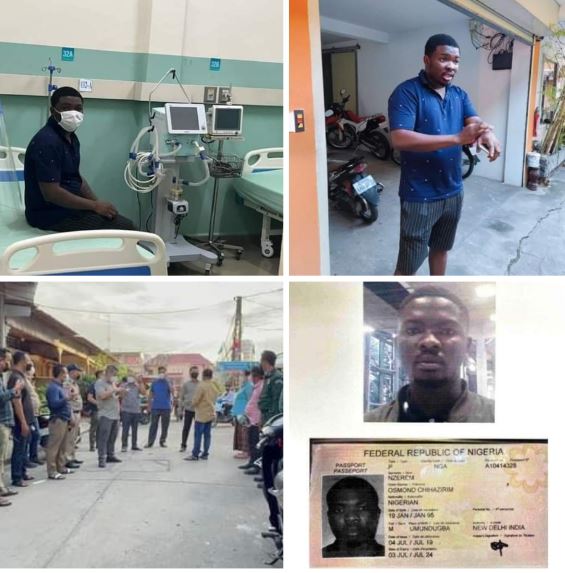 A Nigerian national identified as Osmond Chihazirim Nzerem, who was diagnosed with monkeypox in Thailand has been arrested in Phnom Penh after fleeing across the border to Cambodia.

The Bangkok Post first reported on July 23 that the 27-year-old Nigerian man was confirmed by lab tests to be Thailand's first case of monkeypox.

Ministry of Health spokeswoman, Or Vandine confirmed that the man was diagnosed with monkeypox by Thai health authorities and fled on the night of July 22.

District governor, Theng Sothol who confirmed the developmen said the man has been sent to the Khmer-Soviet Friendship Hospital.

"We sent him to the hospital at around [7am]. We referred him to health officials for further action," he said.

The Nigerian's case was discovered on the tourist island of Phuket last weekend when he visited a private hospital with symptoms similar to monkeypox.

According to Thai health officials, the hospital took samples from the patient for laboratory tests last Saturday. On Monday night, the results came back positive.

The Phuket Health Authority said that after receiving the results of the test, the patient refused treatment, turned off his phone and did not contact the hospital.

The Nigerian man arrived in Thailand on Oct 21, 2021 and had been staying in a condo in Patong, Phuket.

In Bangkok on Saturday, July 23, before news of his arrest, Department of Disease Control director-general Opas Karnkawinpong said authorities in Cambodia were trying to locate the man.

Dr Opas said the Nigerian national had fled with assistance from other people and his department would liaise with law enforcement agencies to take action against anyone who helped him escape.

Public Health Minister Anutin Charnvirakul said he had received a report of the man leaving Thailand.

The man boarded Ethiopian Airlines flight ET0618 to Suvarnabhumi Airport on Oct 21 with a non-immigrant visa to study language at a university in the northern province of Chiang Mai until Jan 18, according to the Public Health Ministry.

Phuket officials said he went to a private hospital on July 16 a week after he developed a fever, coughing, a sore throat and runny nose. He also had a rash and lesions in his genital area which had spread to his face.

A doctor suspected Mr Nzerem may have monkeypox so sent a medical sample for tests.