Buhari while in the country will also deliver an address bordering on West Africa’s security, free and fair elections and respect for rule of law. 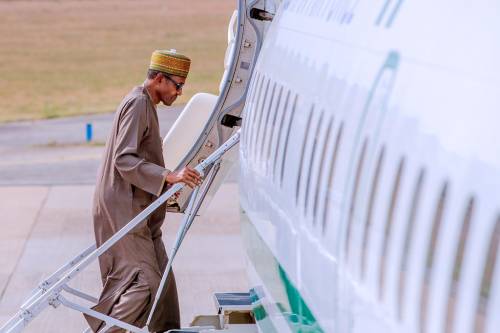 President Muhammadu Buhari will today leave Abuja for Liberia to attend the 175th independence anniversary of the country.
Buhari while in the country will also deliver an address bordering on West Africa’s security, free and fair elections and respect for rule of law.
The Senior Special Assistant to the President on Media and Publicity, Garba Shehu, confirmed this in a statement on Monday.
According to Mr Shehu, the president, who will be the Special Guest of Honour at the event, joined other world leaders and organisations to rejoice with the people of Liberia at the event with the theme: “Fostering Unity, Protecting Our Peace for Development and Prosperity.”
The Liberia visit comes at least two days after the release of viral video footage showing terrorists—including an escapee from the July 5 Kuje Prison attack whipping the remaining 43 of over 61 passengers kidnapped from a Kaduna-bound train on March 28.
In the video, the terrorists threatened to kidnap the President and the Kaduna State Governor, Nasir El-Rufai.
But Shehu, who revealed that Buhari is traveling to Liberia, Tuesday, July 26, said, “the trip signifies the importance attached to the security and wellbeing of Liberia and the rest of West Africa.”
The statement read in part, “On this day, Liberia marks a Special Independence anniversary, commemorating 175 years of self-rule, with the country being the oldest independent post-colonial African State
“President Buhari is the Special Guest of Honour at the celebration and will deliver an address. The trip to Liberia comes at a time when political instability and the return of coups-d’état have upended two to three decades of democratic order in the sub-region.
“Liberia, Sierra-Leone along with Nigeria are going into elections in 2023 and President Buhari is expected to emphasize to them the importance of free, fair and credible elections.”
In his address, the President is expected to stress the importance of the respect for rule of law rule throughout the sub-region. Without rule of Law and constitutional rule, there cannot be security, peace and development.
Further justifying the President’s trip, Shehu said “Peace and security of Liberia (and Sierra-Leone) is important to Nigeria given the enormous investments in men, material and resources expended by this country to secure the two states.
“Without the leadership of Nigeria in the context of ECOWAS to secure these two, there would not have been a Liberia on the map in its present configuration today.
“Bilaterally, Nigeria and Liberia may bring to the table issues of cross-border terrorism, bolstering defense and trade ties. The warmth of the relationship and personal chemistry between President Buhari and George Weah of Liberia is no less significant and will play a key role in the events of tomorrow.”
Top Stories