Meanwhile, officials urged the general public to report cases of cyber crime immediately on the dedicated helpline number 1930 or 112. 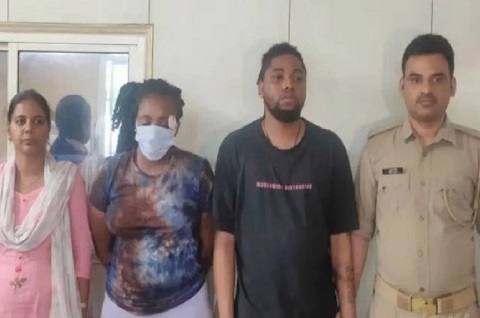 The police in India have arrested a Nigerian man and his Senegalese girlfriend for allegedly engaging in fraud.
They were arrested in Greater Noida, India for allegedly duping crore of rupees from over 150 women on the pretext of marriage.
The accused identified as Chidubem Christian, 27, and his partner, 26, were arrested by a team of the Sector 36 Cyber Cell of the Uttar Pradesh Police from their hideout on Thursday, July 28.
According to the police, the accused had come to India on business visa in 2019 to do hair-related business. Instead, they duped women on matrimonial sites and social media by pretending to marry them.
Crime Police in-charge, Rita Yadav said the accused were arrested after a Noida resident, Shreya Sharma registered a formal complaint.
The victim told the police that a man posing as the head of an IT company in Belgium, has extorted Rs 8.40 lakh from her. The complaint was registered and a formal investigation was launched into the matter.
"The accused are part of a gang who duped the Noida based woman of lakhs of rupees and have been arrested," the Cyber Cell said in a statement.
On the modus operandi of the gang, the Cyber Cell said, "The accused man had befriended the complainant over social media under a fake identity, saying he was based abroad. He had used a fake name and profile picture to interact with her and gain her confidence."
The accused then told the complainant that he had sent her gifts and foreign currency and shared forged courier receipts with her in order to establish authenticity of his acts, according to the statement.
Subsequently, his woman partner would call up the complainant, identifying herself as a customs department official.
"She would tell the complainant that her parcel with gifts and foreign currency is stuck with the department and would be released after she clears fees for it.
The woman would eventually threaten the complainant of implicating her in money laundering and tax fraud case to make her cough up the money," it stated.
The accused duo got the money transferred into a bank account and withdrew it immediately to fund their luxurious lifestyle in Greater Noida and also send a part of it to their families back home, the police said.
An FIR was lodged in the case at the Sector 36 Cyber police station in Noida under Indian Penal Code sections 420 (cheating), 467, 468 471 (all related to forgery), 388 (extortion), 120B (criminal comspiracy), the police said.
The accused had also allegedly assaulted the police team which had gone to arrest them and have been booked under relevant sections of the law, the police added.
Meanwhile, officials urged the general public to report cases of cyber crime immediately on the dedicated helpline number 1930 or 112.
They have also asked the public to be cautious during financial transactions online in order to avoid hassles.
Top Stories