Governor Abdulrazaq had attended the rally of the ruling party to pacify the aggrieved members, but his plea fell on deaf ears. 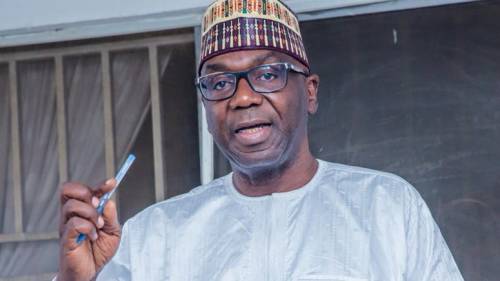 Some aggrieved members of the All Progressives Congress in Kwara state have attacked the Governor, Abdulrahman Abdulrazaq, on Monday.
Videos circulating online showed the moment he was nearly chased out of the venue of a meeting by the party members.
He had attended a rally of the ruling party to pacify the aggrieved members, but his plea fell on deaf ears, Naijanews reported.
Rather than get the attention of the APC members, who are reportedly planning to dump the party for the Peoples Democratic Party (PDP) ahead of the 2023 governorship election, they took turns to shout ‘Ole’, which simply means ‘thief’.
Some others also shouted ‘Sai Bukky’, which is a popular political chant in the North Central state, used in praising the former Senate President, Bukola Saraki, who was once a governor in the state.
The Kwara State chapter of the APC has been experiencing internal crisis, with some condemning the primary election of the party which denied some top members return tickets.
The lawmaker representing Kwara Central district, Senator Ibrahim Yahaya Oloriegbe had accused the State Governor, Abdulrazaq, of cheating during the primary after he lost his return ticket to the Senate.
The ruling party might be facing a similar issue which cost the APC the governorship election in Osun State.
Watch the video below:
Top Stories