He was alleged to have been captured at the boundary between Izombe and Agwa communities in Oguta local council following a fierce gun battle. 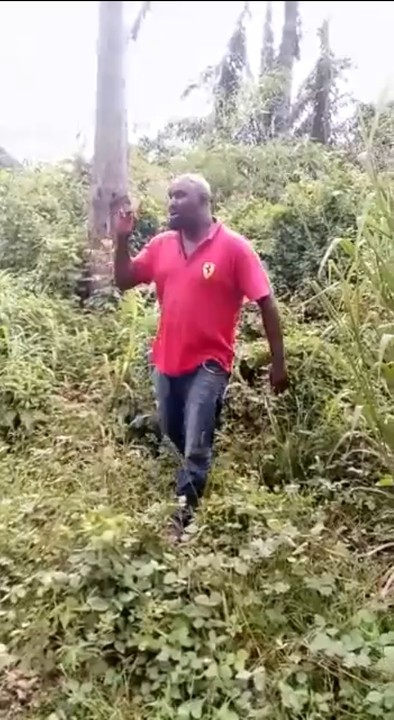 The person in the trending video
Nigerians have asked questions following alleged reports that Ogwu Mayor, the commander of Ebubeagu in Imo state was some days ago captured by unknown gunmen.
Some wondered if the person captured in a trending video alleged to be Mayor is actually the Ebubeagu commander.
A video had surfaced on Twitter with claims that he was the one captured and shot.
He was alleged to have been captured at the boundary between Izombe and Agwa communities in Oguta local council following a fierce gun battle Sunday.
A report by DailySun claimed that the Ebubeagu operatives had reportedly positioned themselves on the way from Amakpuruedere Izombe village to Ogborafor Izombe market, trying to prevent the village from participating in the market outing of the yearly Okorosha Izombe festival.
A source confirmed to DailySun that following an exchange of gunfire between the gunmen and the state militia, which lasted for about two hours, the operatives abandoned three of their vehicles and fled.
According to him, “the operatives of Ebubeagu Security Outfit felt that the event would be an avenue for them to come and arrest the masterminds of Friday’s Agwa Police Station destruction where four policemen were killed and vehicles burnt with explosives, some whom they felt would be there because of the closeness of Izombe to Agwa.
“On getting to the venue of the cultural festival, the Ebubeagu operatives made attempts to disrupt the event which was resisted by the people. Unknown to them, some gunmen who got information about their presence in Izombe rushed down to the boundary between Izombe and Agwa where they laid ambush for them. When they later came down to the boundary after their futile attempt to disrupt the festival, they were confronted by the unknown gunmen who engaged them in a gun duel. This eventually led to the capture of not less than two Ebubeagu operatives by the unknown gunmen, while some scampered for safety”, the eyewitness disclosed.
When contacted for comment, spokesman of the Imo State Police CSP Mike Abbattam was yet to confirm the incident as of press time.
Top Stories