Mr Ruto is the incumbent vice president while Mr Odinga is a former opposition leader who is now enjoying the backing of incumbent President Uhuru Kenyatta. 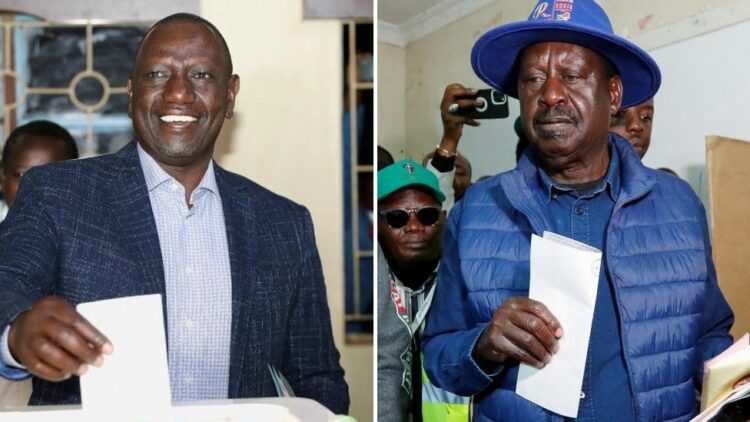 Presidential candidates William Ruto and Raila Odinga are currently in a close race as election results in Kenya are being collated.
Media platforms in the current have different figures showing the candidate leading the race, but none is official.
However, the race is between Ruto and Odinga.
Mr Ruto is the incumbent vice president while Mr Odinga is a former opposition leader who is now enjoying the backing of incumbent President Uhuru Kenyatta.
Information on the collation portal of the Independent Electoral and Boundaries Commission (IEBC), showed that 99.79 percent of form 34A have been reported, that is 46,132 out of 46,229 counties. However the portal does not yet show the total vote count for each candidate.
Wallace Gichunge, a communication expert in Kenya who spoke with Premium Times, said media houses in Kenya are biased with some reporting Mr Ruto as leading and others reporting Mr Odinga as leading.
He noted that the IEBC is deliberate with the outlook of its portal which does not show who is leading as it may cause some unrest in the country, adding that it was the best thing to do until it was clear who the winner is.
If none of the candidates attains the constitutional threshold of over 50 per cent votes and 25 per cent of majority counties needed, there will be a rerun.
Mr Gichunge suspects there will be a rerun given the stiff competition between the two major contenders, even though there are four presidential candidates in the election.
There are 22,120,458 registered voters in Kenya to decide the fate of about 53 million people A total of 16,105 candidates are taking part in the election and are vying for 1,879 elective positions.
In the elections, candidates are vying for six positions, namely: president, governors, senators, county women, members of the National Assembly, and members of county assemblies.
Top Stories