The robbers were arrested after they invaded the shop of a man where he operates Mobile Banking Services and other business activities. 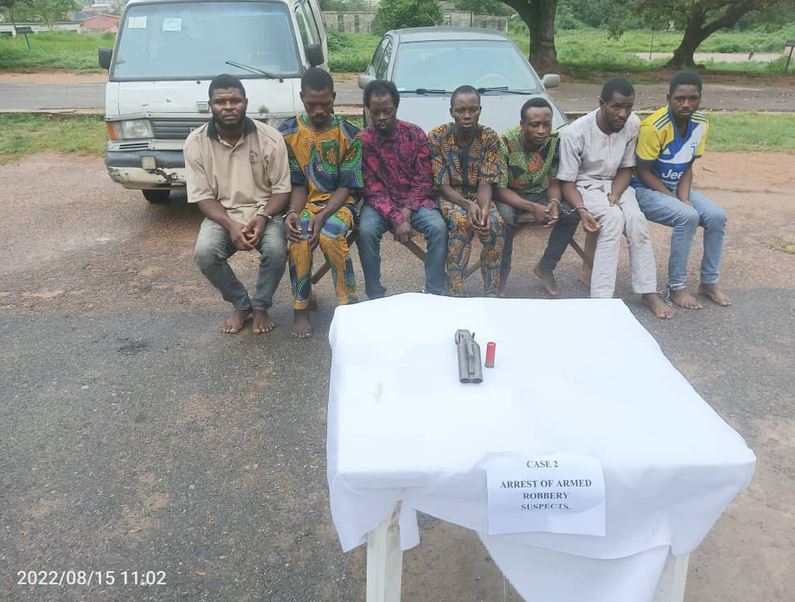 Members of a suspected armed robbery syndicate causing havoc in Oyo town have been apprehended by the police.

The robbers were arrested on July 23 after they invaded the shop of one Abass Taiwo where he operates Mobile Banking Services and other business activities.

The notorious hoodlums who were armed to the teeth attacked Abass Taiwo, dispossessing him of huge proceeds from his Point of Sale ‘’POS’’ Machine, ten different mobile phones belonging his customers and some other valuable items at gunpoint.

However, the victim immediately raised alarm while the hoodlums were fleeing from the scene of crime, which caught the attention of the valiant operatives of the state police command’s monitoring unit who were on an intelligence-led patrol in the area.

One of the robbers who later identified himself as Ibrahim Olusola was apprehended. Upon interrogation, the suspect confessed to the crime and series of similar criminal activities he had masterminded with his fleeing syndicate members.

He equally gave useful information which later led to the identification, tracking and eventual arrest of his criminal gang members from their various hideouts while the syndicate kingpin, Opeyemi Segun Aka Omo Jesu was arrested in the Federal Capital Territory, Abuja. The other suspects arrested include Ismaila Afeez 32, Ibrahim Isiaka 25, Tijani Habeeb 23, Wasiu Salawu aka Body, Opeyemi Segun aka Omo Jesu 32 and Ibrahim Balogun 23.

Confirming their arrest to newsmen, the spokesperson of the state police command, SP Adewale Oyifeso, said One double barrel locally made gun, one live Cartridge, and a Mazda Bus which they drove to the scene of the crime were recovered from the suspects.

He added that the suspects have since confessed to the atrocious crime including armed robbery operation on June 4 at Idi-Gedu area along Oyo/Iseyin road Oyo in which six traders including three women who were travelling from Iwo town in Osun State to Okeho area of Oyo State in a commercial Mazda bus were intercepted and attacked.

He said the six traders and the commercial bus driver were bundled in one Toyota Corolla Car and moved to a desolate location inside a thick forest, where they were dispossessed of huge sums of money eight cell phones and equally carted away the one hundred and eighty ‘’180’’ kegs of palm oil valued at Three million six hundred thousand naira (N3, 600, 000. 00) only loaded in the Mazda Bus.

Oyifeso added that an investigation is still ongoing and the suspects would be charged to court upon its completion.