Odinga, spoke at a press conference after the announcement of the election results. 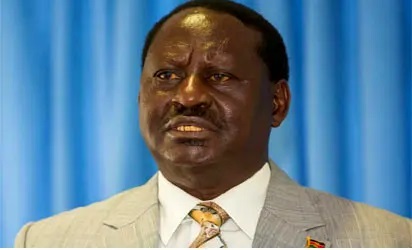 The results of the 2022 Kenyan Presidential election has been declared null and void by Raila Odinga.
The former Prime Minister and a candidate in the just concluded election spoke at a press conference after the announcement of the election results.
He described the election results as a disregard for the constitution of Kenya.
“Such action constitutes a threat to the security of the country. Justice will prevail,” he said.
Recall that the Independent Electoral and Boundaries Commission (IEBC) has declared Kenyan Deputy President William Ruto the winner of the country’s presidential election.
IEBC chairman Wafula Chebukati announced Ruto as Kenya’s President-elect in the nation’s capital, Nairobi on Monday.
According to the Kenyan online newspaper, Nation, Ruto was confirmed the winner of a closely fought election after harvesting 50.49% of the vote against his main opponent Raila Odinga’s 48.85%.
The announcement at the Bomas of Kenya auditorium, which comes six days after Kenyans went to the ballot, was followed by jubilation from the Kenya Kwanza camp. There was also audible disgruntlement from the Azimio camp.
The election which took place on Tuesday, August 9, took seven days for the electoral body to count.
Top Stories