The group attributed the rising insecurity in the country to the inability of the NSA to advise the President, Major General Muhammadu Buhari (retd.), on measures to put in place to tame the scourge. 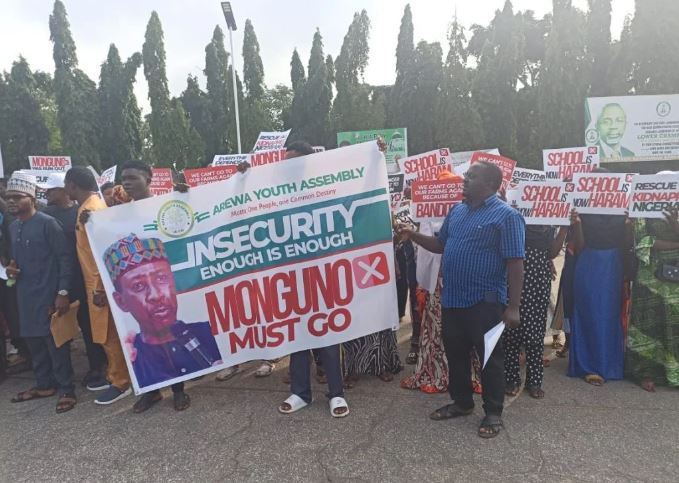 Arewa Youth Assembly, a northern group, has protested in Abuja.

The called for the removal of the National Security Adviser, Major General Babagana Monguno (retd.), over the lingering insecurity in many parts of the country.

The group attributed the rising insecurity in the country to the inability of the NSA to advise the President, Major General Muhammadu Buhari (retd.), on measures to put in place to tame the scourge.

The PUNCH reports that Monguno was appointed in 2015 and was spared when the Chief of Defence Staff, General Abayomi Olonishakin; Chief of Army Staff, Lieutenant-General Tukur Buratai; Chief of Naval Staff, Vice Admiral Ibok-Ete Ibas; Chief of Air Staff, Air Marshal Sadique Abubakar were sacked by the president over their failure to check widespread insecurity across the country.

Addressing journalists during a protest at the National Assembly on Wednesday, the group’s Publicity Secretary, Aliyu Muhammed, lamented that under the watch of Monguno, terrorists have been emboldened.

He said, “In response to the astronomic increase in the cases of unprovoked killings and abductions of Nigerians in their farms, houses, train and our major highways which has led to an unprecedented rise in the poverty rate and food scarcity across the country, we want the immediate removal of the National Security Adviser.

“In concordance with the similar situation in the southern part of the country where citizens are not allowed to come out on Mondays to pursue their businesses, thereby further impoverishing them. All this is because there is a severe defect in the security architecture of our country.

“The criminal elements became emboldened under his watch as the NSA, they equally ambushed and killed some officers of the Brigade of Guard to Mr President and also issued notice to kidnap our a seating President, Buhari and Governor Nasir el-Rufai of Kaduna State. This is unfortunate and unimaginable in the history of nationhood.

“The NSA is either not advising the President or his ideas are ineffective, hence, the seeming triumph of ragtag elements over our Armed Forces. We, therefore, call for his immediate resignation or be sacked by Buhari.

“We want the security of this nation to unconditionally be improved from its present state to a satisfactory one, and all Nigerians in captivity should be fought for and set free, unconditionally.”

Muhammad vowed that the group would mobilise and hold a massive protest across the 19 northern states if the president refused to sack the NSA by Friday.

“We are calling off the protest today, to accord appropriate time for President to act accordingly, and after two days nothing is done, the protest will continue, not only here, but in all the 19 Northern states,” he stated.