The publisher, who was in a relaxed mood, had praised Tambuwal with some songs. 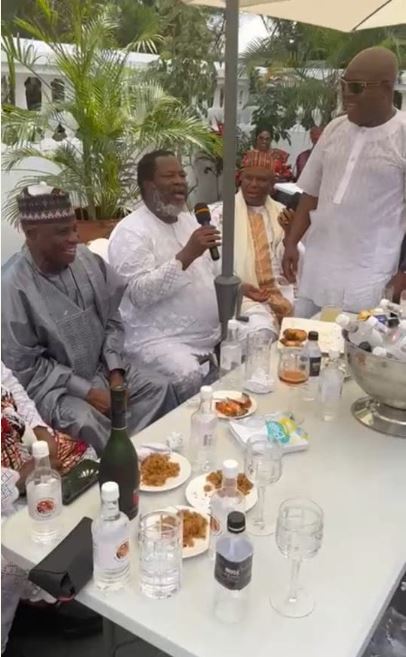 Governor Aminu Tambuwal of Sokoto State has shown his disapproval after Nduka Obaigbena, founder of THISDAY and ARISE TV mocked Governor Nyesom Wike of Rivers State.
The incident took place over the weekend.
Obaigbena, who hosted influential personalities in his hometown in Delta State during the funeral of his mother, Margaret Obaigbena, had briefly taken the microphone from Shina Peters, Afro Juju singer, who was entertaining the guests.
The publisher, who was in a relaxed mood, had praised Tambuwal with some songs.
He started by singing, “Governor of Sokoto”, to which some persons chorused, “Tambuwal”; “Chairman of PDP Governors’ Forum,” and the people responded, “Tambuwal!”; “Presidential candidate, Tambuwal!”; “Future president”, Tambuwal!.”
Tambuwal, who sat next to Obaigbena, shook his head, gesticulating in a manner that he did not approve of it when the publisher said, “Wike ‘lule”, but Obaigbena kept hammering on it.
Lule, a word in Yoruba which means “fallen or failed”, found its way into the Nigerian political lexicon after the outburst of Asiwaju Bola Tinubu, Presidential Candidate of the APC, in Abeokuta, Ogun State capital in June.
Tinubu, who had said it appeared there was a gang up against him in the presidential race had said it was his turn to be president.
He had said President Muhammadu Buhari failed in his bid to be president thrice until he teamed up with the incumbent president.
The following month, THISDAY had Lule on its cover page while reporting the loss of the ruling party in the Osun governorship election.
“APC, Tinubu, Oyetola in Osun: Won Lu‘le, PDP’s Adeleke Wins”, was the headline of the lead story on THISDAY a day after the election.
Meanwhile, Tambuwal and Wike who were allies fell out after the PDP primaries won by former Vice-President Atiku Abubakar.
While Atiku polled 371 votes, Wike garnered 237 votes.
Tambuwal, who was an aspirant had stepped down for Atiku, a move seen to have brightened the chances of the presidential candidate.
Top Stories