Paris Meeting: We Are Not Concerned About Amaechi – Tinubu’s Camp


Recall that Wike and Tinubu met outside the country to discuss issues relating to the 2023 presidential election. 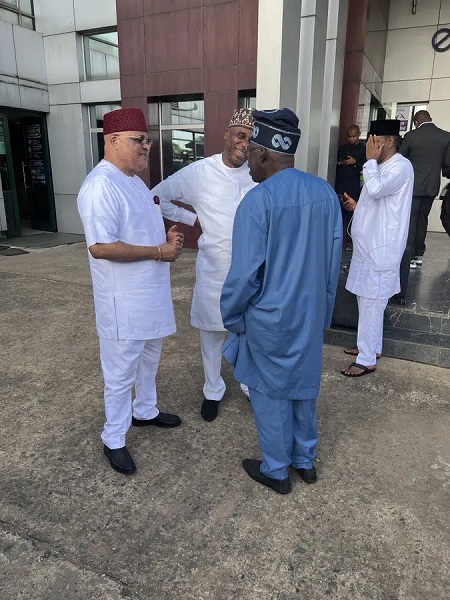 Reactions have followed the meeting between the presidential candidate of the All Progressives Congress (APC), Bola Tinubu and Governor Nyesom Wike of Rivers State.

Recall that it was reported that Wike and Tinubu met outside the country to discuss issues relating to the 2023 presidential election.

Wike and former Minister of Transportation, Rotimi Amaechi are not in good terms.

There are reports that Wike, who is having a running battle with the Peoples Democratic Party (PDP) presidential candidate, Atiku Abubakar may reach agreements to support Tinubu and the APC in the 2023 elections.
In a chat with The Punch, a source belonging to the Tinubu camp who spoke on the condition of anonymity said the Tinubu camp is not bothered about the former Minister of Transportation, Rotimi Amaechi.
The APC chieftain said Amaechi has not shown support for Tinubu’s presidential ticket and has been lukewarm to the party’s preparation ahead of the campaign.
He said the former minister does not have any electoral value to deliver River state to Tinubu like Wike, adding that the governor’s action is giving Amaechi’s camp sleepless nights.
He said: “We are not concerned about (ex-minister Rotimi) Amaechi at the moment. He has been lukewarm to Tinubu’s ticket and we know Wike’s action is giving his camp sleepless nights. In truth, what does Amaechi brings to the table?’’
“In the last elections, how many votes did Amaechi garner from Rivers for the APC? In the 2015 election, he raked in over 60,000 votes. In 2019, he brought 130,000 votes. What is all that? We didn’t even win 10 per cent.
“Politics is a game of numbers. You need to have people who will back your ticket, not people without electoral value. Wike has done far more than he did. I don’t know how Wike did it but he seems to have warmed his way into the hearts of his people and they seem to support him more. The way we see it, Rivers State is very important to anybody who wants to win the presidency.’’
Top Stories