They were arrested by operatives of the Abuja Zonal Command of the EFCC for internet-related offenses. 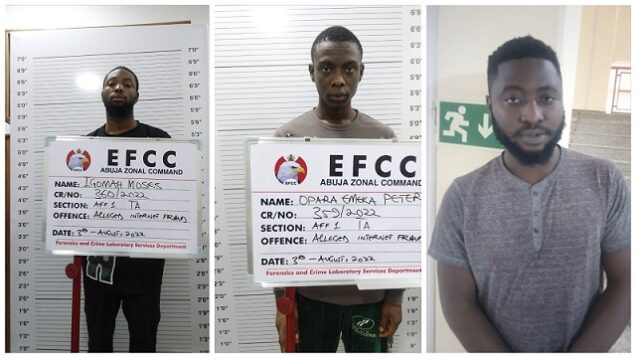 They were sentenced to various terms of community service for presenting themselves as Americans for the purpose of carrying out romance scam.

According to EFCC, Chukwuma, in June 2022, made efforts to cheat one Florita, a Spanish citizen by representing himself on two social media apps as one Goodwill Chigo and Pablo Dennis, an American engineer living in Los Angeles.

Peter, on the other hand, pretended to be one John, a military personnel based in Afghanistan, in an attempt to defraud his victims while Okinni impersonated one Eliana Harold, an American military woman

Justice J.O.E. Adeyemi- Ajayi of the Federal Capital Territory, FCT High Court, Maitama convicted and sentenced the trio of on Wednesday after they pleaded guilty to one-count separate charge bordering on impersonation, upon their arraignment by the Abuja Command of the EFCC.

The Judge convicted and sentenced Chukwuma to clean the FCT High Court, Maitama, for five hours a day for a period of twenty one(21) days.

He convicted and sentenced Peter to one month imprisonment and ordered him to serve as a clerical officer of the prosecution counsel for twenty(20) days.

Also, he was ordered to depose to an affidavit of good behaviour. Additionally, the judge released his phone and drone seized at the time of his arrest.

Okini was also convicted and sentenced to fourteen(14) days of cleaning the court premises. He is also to depose to an affidavit of good behaviour.