Sebastian has been growing big fruit and veg with the help of his wife Renata for seven years. 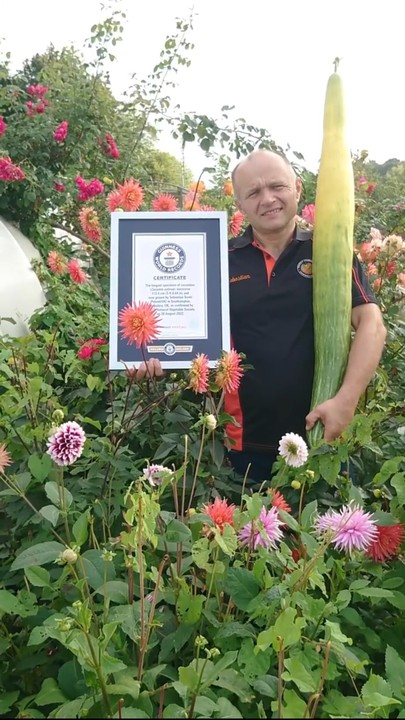 A gardener has shared photos of the longest cucumber in the world.
Amateur gardener Sebastian Suski has been identified as the proud new owner of the world's longest cucumber.
The cucumber is a specimen of Cucumis sativus that until this week was growing in a polytunnel at his allotment.
Despite the blisteringly hot summer in the UK, Sebastian - who was born in Poland but now lives in Southampton - was able to tend to his impressive patch of cucumbers and produce a whopper measuring 113.4 cm (3 ft 8.6 in), beating the previous record by 6.4 cm (2.5 in).
Sebastian has been growing big fruit and veg with the help of his wife Renata for seven years.
He volunteers for the European Giant Vegetable Growers Association (EGVGA) - a support group for fans of garden giants - and now is an international officer for the Great Pumpkin Commonwealth (GPC).
He has even set a few national records in his time as a grower, but that elusive world record had been denied to him... until now!
"I'd grown big cucumbers but never quite long enough to beat the existing Guinness World Records title holder," said Sebastian.
"Growing super-long cucumbers is a risky business," he continues. "If you cut too soon, you're not going to have a record-breaker, but if you leave it too long, you get into the danger zone. You risk your cucumber rotting as it grows - you don't want it exploding on you!"
Sebastian cut his king-sized cucumber at just the right time, and although it's starting to turn yellow, it's still intact, and will be for about 10 to 12 days more. 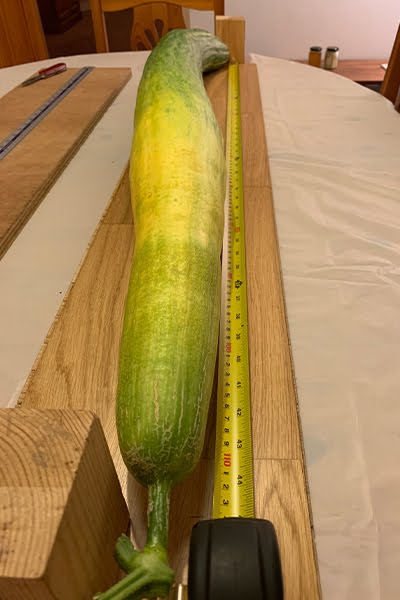 He almost lost out on the chance to be a record holder, however, when he was hospitalized at a crucial point in his cucumber's growth.
"Doctor found a leaking blood vessel in in my head and so I spent a week in hospital. But luckily my wife Renata was on hand to care for the cucumber and keep her well-watered and nourished. Without Renata, I wouldn't have this record."
And yes, Sebastian refers to his cucumber as a "she"! "They're one of the family, really, like babies that need a lot of love and attention."
He and Renata have four children, and the whole family seems to welcome these vegetal siblings into their lives. 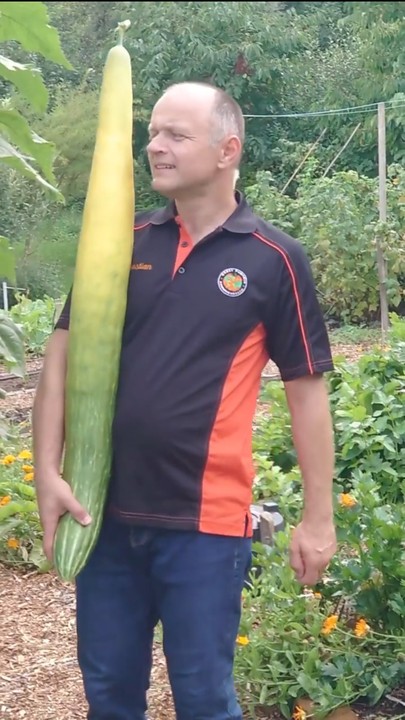 Sebastian is a passionate gardener in his spare time, when he's not packing and shipping contact lenses for a living. Intriguingly, he's also curious about the pedigree of his seeds, and traced the history of the seed that bore his record-breaking cucumber.
"I've tracked the seed back 15 years to record-breaking specimens from the UK to Germany to Poland and back to the UK again," he explains, before name-dropping some of the most celebrated growers in the giant-vegetable community.
"These seeds have come to me from Piotr Holewa - the top grower in Poland, whose cucumbers can reach up to 99 cm long - via David Thomas, Peter Glazebrook and the original source, the famous Alf Cobb."
These last three gardeners have at some point held records for their grows. Cobb is a former holder of the longest cucumber record, and also the heaviest cucumber, which is currently held by Thomas.
Glazebrook, meanwhile, has also held both records in the past and was recently celebrated for growing the heaviest eggplant/aubergine.
Top Stories