I Was Trapped For Hours, Says Victim Of Abuja Collapsed Building


Olayinka, who returned to the site of the incident after being treated at the hospital, told newsmen that he arrived at the collapsed building on Monday. 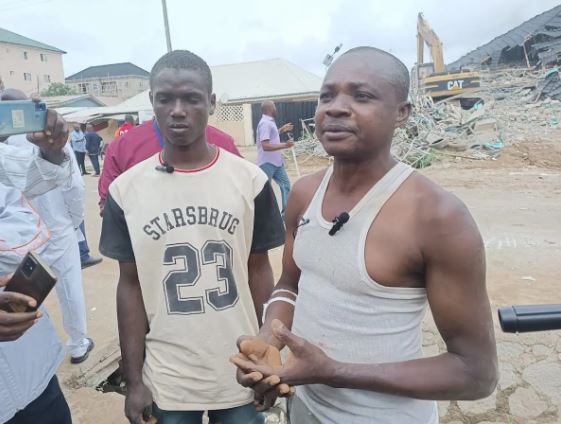 One of the victims who was rescued from a collapsed building in Kubwa, Abuja, Hafeez Olayinka, has spoken on his ordeal.

The man who was rescued from the building on Friday morning, said he was trapped for hours.

Olayinka, who returned to the site of the incident after being treated at the hospital, told newsmen that he arrived at the collapsed building on Monday.

“I alongside others were trapped since Thursday night. I have been here since Monday to fix up some things in the building. At about 11:30 pm on Thursday, we noticed that the building was collapsing, and we tried to escape but we couldn’t five of us we were rescued this morning, and they took us to the hospital,” he said.

Ms Pricillia Christopher, a resident, said she was in bed when the building caved in on Thursday night.

“I was sleeping and suddenly heard a loud sound around 11:30pm. The building is just behind the place I stay. I learnt there was no cracks. It just collapsed,” she said.

“Four people have been rescued so far. Two other persons are said to be trapped under the rubbles. NEMA rescue team presently at the site coordinating the Response. Equipment deployed are excavators, graders, cutters, etc.”