He was killed with a pump action shotgun at his residence in the city of Hola Prystan on Sunday, August 28. 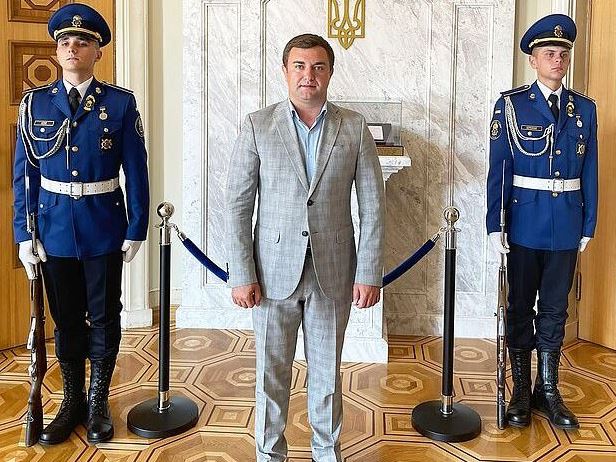 A Ukrainian politician who turned against his country to take sides with Vladimir Putin when he ordered the invasion of Ukraine has been killed while his wife was stabbed at their home in the occupied Kherson region.

Oleksiy Kovalyov, 33, a senior official in charge of agriculture in the Moscow-appointed military-civil administration in Kherson, was killed with a pump action shotgun at his residence in the city of Hola Prystan on Sunday, August  28.

His wife, 38, was also stabbed and her throat slit in the attack before she died in hospital, local media report.

Russian officials said they would probe the attack, the latest in a series of apparent assassinations of Moscow-backed officials in occupied areas.

The couple are believed to have been assassinated by a hit squad, local media reports.

After an earlier failed assassination bid, Kovalyov had defiantly told his Ukrainian enemies: 'You won't stop me.'

A Telegram channel run by Ukrainian journalist Andrei Tsaplienko confirmed: 'The traitor, collaborator and former People's Deputy Oleksiy Kovalyov was shot dead in his own house.

'The occupiers have begun intensive searches and document checks. Be careful, Ukrainians.'

The assassination of the official and his partner is the latest killing of a number of Ukrainians who have taken administrative or police positions under the occupying Putin forces.