Ebubeagu is a security outfit set up by the South-East Governors' Forum to combat insecurity and protect residents of the region from marauding herders who have been carrying out deadly attacks and kidnapping people. 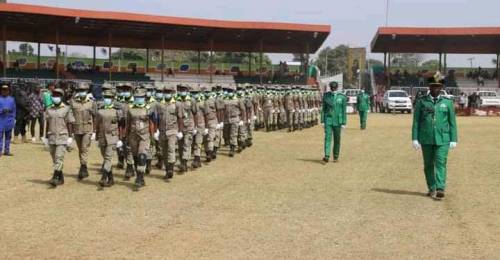 The operatives of Ebubeagu, the Southeast Nigerian security outfit, have allegedly invaded an Anambra community.

Ebubeagu allegedly invaded Oba in the Idemili South Local Government Area of the state and tried to kill its youth chairman.

Ebubeagu is a security outfit set up by the South-East Governors' Forum to combat insecurity and protect residents of the region from marauding herders who have been carrying out deadly attacks and kidnapping people.

The outfit has been accused of carrying out extrajudicial killings in the South East, which reached its climax on July 17 when it allegedly massacred 14 wedding guests in Imo State. This prompted calls to disband the security outfit.

However, SaharaReporters gathered on Tuesday, that members of Anambra Ebubeagu invaded Oba community and allegedly attempted to abduct the youth chairman but were resisted.

A resident of the community who gave his name as Tochukwu lamented the unprofessional activities of this monstrous group called Ebubeagu.

He said, “Ebube Agu entered Oba, wanted to kill Oba youth chairman. The Oba youth Chairman is strong in all ramifications. They shot him several times but the bullet couldn’t enter.

“He now called Oba people, who came and captured the Ebubeagu people, beat them blue-black, destroyed their vehicles and took them to the Palace.”

He said that the situation led to palpable fear in the community, adding that Ebubeagu is known for returning to attack communities where they faced humiliation.

Meanwhile, the community on Tuesday evening staged a peaceful protest against the Ebubeagu's invasion and its alleged attempt to kill their youth leader, community sources said.

A young man in a video posted on Twitter, which was seen by SaharaReporters on Tuesday night, queried why a government security outfit would invade a community and start shooting people.

He said, "I was in the car with the Chairman, Oba Youth when a Senna Bus opened fire on our vehicle in our community. We are both security men, duly acknowledged by the government. So why should Ebubeagu of Anambra Vigilante Group operatives come to our community and open fire on the youths? Are we now criminals?"

The spokesperson for the state police command, DSP Toochukwu Ikenga, confirmed the incident to SaharaReporters on the phone but added that peace had returned to the community. He described the incident as a misunderstanding.

He said: “It was just a misunderstanding between vigilante operatives and Oba youths, who felt that the vigilante men attacked their chairman.”

“As I speak to you, the DPO (Divisional Police Officer) of that area is there, and he is making sure that there is peace and order. We have been able to calm the situation down,” he added.