It was gathered that items such as phones, documents, freezers, a generator, tyres, food items among others were lost to the incident. 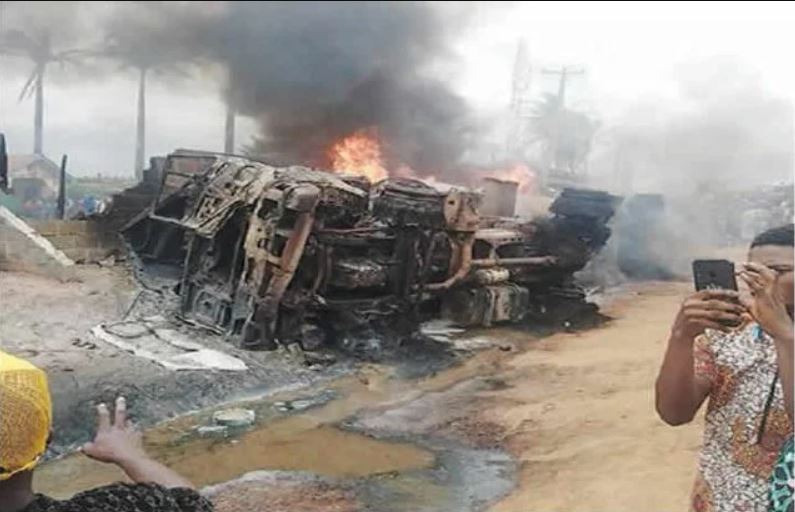 There was serious commotion recently when a fuel tanker loaded with 45,000 litres of Premium Motor Spirit otherwise called petrol exploded in Ogun State.

The tanker explosion happened on Saturday fell and exploded at Olambe along Matogun road in the Ifo Local Government Area of Ogun State.

Sunday PUNCH reports that the tanker content spilled leading to an inferno which engulfed the area.

Eyewitnesses told our correspondent that before the unmarked tanker fell, some of its content had spilled on the road. They added that the driver who is now at large couldn’t control the vehicle before it later fell on the road.

It was observed at the scene of the incident how some youths assisted in putting out the fire upon the arrival of fire-fighters from the state Fire Service. The explosion destroyed 10 residential houses, two churches and eight shops.

Sunday PUNCH saw residents and business owners in the area in tears as their belongings went up in flames.

The Lagos Territorial Coordinator, National Emergency Management Agency, Ibrahim Farinloye, in a statement earlier on the incident, said that the tanker fell and spilled its contents and exploded around 7am in the area.  He added that no life was lost and no one sustained injury, noting that about 10 buildings were destroyed in the incident.

Farinloye said, “The situation was mitigated with most of the content spilling into the canal close to the scene, thereby saving the community from serious incidents that could have affected people. The fire has been put out.”

It was gathered that items such as phones, documents, freezers, a generator, tyres, food items among others were lost to the incident.

Some of the affected victims spoke to our correspondent in tears.

The manager of a hotel affected in the area, Peter Friday, said that the incident came as a shock to the entire community, adding that he was busy with sales when the incident occurred and he quickly moved their guests to a safer place outside the hotel.

He stated, “I sat inside the bar when the incident happened. I saw flames of fire from where I was and I quickly rushed out to call our guests inside the room for them to move out before the fire could penetrate. Four rooms, the main bar, and many things as you can see were affected. We have broken ceilings, mattresses, 50 pieces of burnt chairs, a generator, one reservoir and many other things that got destroyed.

“I want the government to look into this and help us with the structures and losses. I think the incident was caused by the bad road. I feel bad because if the road had been fixed, this incident would have been averted. But we thank God that our guests are in a safe place now.’’

A trader, Dupe Afeni, who was distraught, told our correspondent that she just stocked her shop two days before the incident.

“I don’t know where to start from exactly. I went to the market and stocked my shop two days ago but everything has burnt down. I borrowed money to do business but see the outcome. I don’t know what to do anymore, “ she lamented.

Another victim, Sodiq Akeem who is a tyre repairer, lamented that his tools were burnt, adding that he was still bothered about the situation.

“I received a call from my apprentice that a tanker was burning. I didn’t know it affected my shop until I came back there. The fire burnt down my engine, 10 yres, money contributed by association and other things. I tried to call a woman who sold food items beside my shop because I kept some of my tools and clothes there. I noticed that everything inside the shop has been gutted by fire.’’

A landlord in the area, Gbenga Olawumi, stated that his four shops, a reservoir and a church were burnt to ashes.

Olawumi added, “The tanker lost balance while moving on the bad road. The driver was about to turn it when it suddenly fell. All the tools in the shops have been destroyed. You can see my church too. Sewing machines, fridges, freezers and many food items were burnt beyond recognition. Government should just help us out because I don’t know what else to say.’’

Police were seen preventing passers-by from accessing the scene of the incident as of the time our correspondent left the area at 4pm.

Meanwhile, the state governor, Dapo Abiodun, has expressed sympathy to the victims of the explosion.

In a statement by his Chief Press Secretary, Kunle Somorin, on Saturday, the governor was quoted as describing the incident as unfortunate.

The governor who thanked God that no life was lost to the explosion, however, expressed grief at the level of destruction of people’s property.

Abiodun explained that such an unforeseen incident was one of the reasons his administration decided to embark on the reconstruction of the Ijoko-Alagbole-Lambe-Akute Road, despite the huge amount of public funds sunk into the road without completion by the immediate past administration.

Calling for calm among the residents of the Matogun and its environs, the governor assured that work would be expedited on the road to forestall such an incident and to make life of the people in the axis comfortable.

Abiodun, who reiterated his administration’s commitment to making the people of Ogun State enjoy the dividends of democracy, stated that palliative assistance would be rendered to those who lost their property to the inferno to mitigate their losses.