Sleeping with a phone close to the head, the experts noted also tends to disrupt an individual’s sleep, adding that this can lead to some serious health challenges. 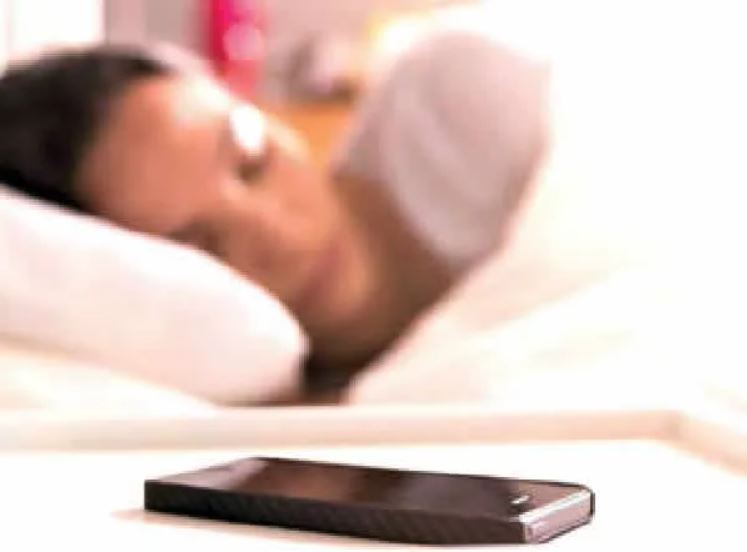 Nigerians have been cautioned by public Health experts against engaging in the bad habit of sleeping with mobile phones close to their heads.

The experts warned that doing this increases exposure to radiofrequency radiation.

Sleeping with a phone close to the head, the experts noted also tends to disrupt an individual’s sleep, adding that this can lead to some serious health challenges.

According to them, individuals who sleep with mobile phones close to the head are at risk of headache, body pain, and stress, adding that their exposure to radiofrequency radiation may further result in poor brain response time.

The experts said that getting good sleep is critical for both mental and physical health, stressing that sleeping close to a phone can make that harder.

Speaking in an interview with PUNCH HealthWise, one of the experts, a Public Health physician at the University of Ilorin Teaching Hospital, Prof. Tanimola Akande said.

“When phones ring or vibrate, it calls for attention. Keeping your phone near your head, therefore, will disturb sleep. It tends to make people sleep for a shorter duration and insufficient sleep comes with some health challenges.

“Inadequate sleep due to phone call distraction will lead to sleep disturbance which can lead to headache, body pain, and stress.

The public health expert further added that there are assumptions that sleeping with phones close to the head can affect fertility or cause genetic malformations in pregnant women, although, he noted that there is no scientific evidence to conclude on this.

Prof. Akande also said, “There are reports that it can lead to brain cancer from radiation exposure but there is no scientific research to prove the linkages between phone radiation and brain cancer.”

The expert, therefore, implored all individuals to cultivate the habit of switching off their phones before going to bed or placing the phone in a position far from the bed to avoid any complications.

He said, “Phones can cause health problems if put close to the head. Such problems are better avoided as much as possible by not putting the phone on the bed.

Malfunctioning phones particularly when being charged can set the pillow or bed on fire.

“Phones can be switched off when going to bed or placed in a room not close to the bed and put in silent mode. It may be placed outside of the bedroom when going to sleep.

“It is important to be careful and ensure that phones are not put on the bed close to the head because of the well-known and established health consequences,” Prof. Akande stressed.

According to the Centers for Disease Control and Prevention, “Yes, cell phones and cordless phones use radiofrequency radiation to send signals. RF is different from other types of radiation (like x-rays) that we know can be harmful. We don’t know for sure if RF radiation from cell phones can cause health problems years later.

“Scientists are also looking into a possible link between cell phone use and certain types of tumour. One type is called an acoustic neuroma. This type of tumour grows on the nerve that connects the ear to the brain. It doesn’t cause cancer, but it may lead to other health problems, like hearing loss,” it said.

The International Agency for Research on Cancer has classified radiofrequency radiation as a “possible human carcinogen.”

A carcinogen is an agent that causes cancer.

Also speaking in the same vein with PUNCH HealthWise, a New Voices Fellow at the Aspen Institute, Dr. Ifeanyi Nsofor said generally, people shouldn’t sleep with their mobile phones next to them or close to their heads at any time of the day.

He said there are several reasons why it is not advisable; stating that one of them is the fact that mobile phones emit radiation and the general knowledge is that exposure to radiation causes cancer.

Dr. Nsofor, however, noted that although no studies have been conducted to confirm this, people should still exercise caution and discontinue the habit of sleeping with mobile phones next to their heads.

The expert said, “Mobile phones emit radiations as well as electromagnetic waves and we know that radiations are implicated in the causation of some cancers.

“Although, I am sure no one has done any form of randomised trial to see what kind of cancers, in particular, are associated with sleeping close to mobile phones, especially with the phone close to the head, regardless, let us not test faith because we know that generally, radiation causes cancer,” he stressed.

“Ultimately, the fact that mobile phones emit radiation and we know that radiation causes cancers, and until we have a strong evidence base for anything to the contrary, we have to work with the notion that sleeping with a mobile phone next to the head can lead to cancers.”

“Of course, if you look at it, your brain is just right there in your head and it is possible radiation could lead to brain cancers, but there is no strong evidence for that in terms of a randomised control trial,” Dr. Nsofor said.

The public health expert further stressed that sleeping with mobile phones next to us would hinder us from getting the required eight hours of sleep, noting that this would give room for the improper functioning of the brain and body.

“When you sleep with mobile phones next to you, especially at night, the likelihood of you fiddling with your phone is very high. When that happens, you are likely not to sleep on time and if you have to wake up early for any reason, you will not get the required eight hours of sleep that is recommended for the proper function of the body.

“So sleeping with mobile phones next to you is not advisable because they don’t allow us to rest the way we are supposed to,” he said.

Dr. Nsofor recommended that all individuals should strive towards ensuring they get the required eight hours of sleep to enable optimal functioning of the brain and body.

“I would recommend us committing to having up to eight hours sleep as much as possible and as often as possible even though sometimes, it may not be possible to get it.

“But let us strive towards that so that every day after a hard day’s job, we are refreshed and ready to start the next day stronger, and for us to do that, we should make sure that our mobile phones are not near our heads.

“It could be on a table somewhere in the room and should be put off or on airplane mode so that calls, messages, or notifications don’t come up that would wake you up and disrupt your sleep.”