Goni Farooq a top Boko Haram commander surrendered over the weekend to the military today with his weapons. 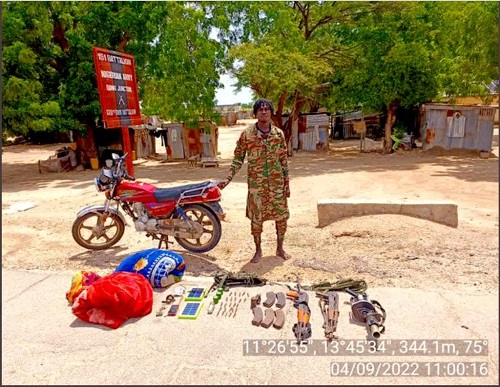 A photo of a top commander of the dreaded Boko Haram terrorist group, Goni Farooq who surrendered to troops of the Nigerian Army has surfaced online.
A counterterrorism expert and crime reports analyst [@mobilisingniger] confirmed the report on Sunday.
The security expert said the Boko Haram fighter surrendered and gave up his firearms to troops manned at Banki in Borno State.
He said the latest victory was unconnected with the recent onslaught in the Bama town in Borno by gallant officers of Operation Hadin Kai.
“Goni Farooq a top Boko Haram commander has surrendered to the military today with his weapons to troops deployed at Banki Junction, Borno State. This was as a result of the sustained onslaught in the Bama town in Borno State a few days ago,” the security expert announced.
Top Stories