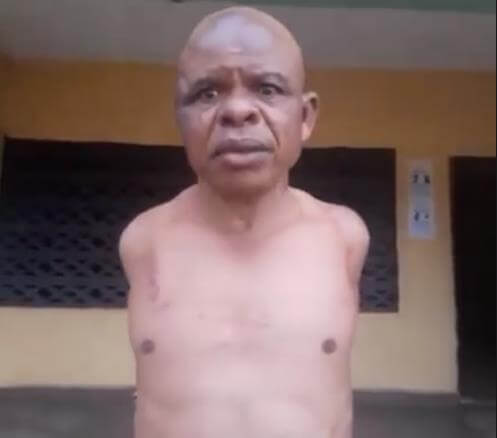 Eugene Obiesie, a suspected child molester has confessed to the crime.
The man from Egbema Ozubulu, in Ekwusigo Local government Area of Ananmbra state, was apprehended by the local vigilante group for child molestation.
He confessed during interrogation.
The 57 years from Egbema Ozubulu to the neighbouring town, Orifite, both under the same Ekwusigo Local Government Area of Anambra State said he looks or unsuspecting minors he’ll lure for his intended crime.
He said he heard that over the radio that Orifitie will be having their new yam festival of this year, so he said to himself that he knows crowd will be there at the festival, which will be a fertile ground for him to hunt and look for little girls he’ll devour.
He admitted to the investigators that he was romancing a small girl with his priv$te part, but denied he didn’t know how the girl got blood stains on her body, before admitting that he’s been defiling kids for over 10years.
He also confessed that he not married at 57years and has been engaging in molesting minors for more than 10yrs.
He stated that he also engage adults, that he likes both adults and minors.
Watch video below: