Sowore spoke on Monday at the memorial lecture held in honour of the late human rights lawyer and activist, Chief Gani Fawehinmi. 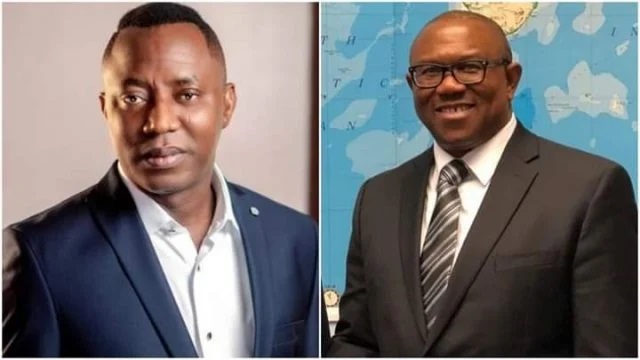 The presidential candidate of the African Action Congress, Omoyele Sowore has stated that he was instrumental in Peter Obi emerging as the presidential candidate of Labour Party.
Sowore made the declaration yesterday while speaking at the memorial lecture held in honour of the late human rights lawyer and activist, Chief Gani Fawehinmi, in Lagos.
According to Punch, Sowore said that the Labour Party ran into a problem in the course of choosing the candidacy of Obi, as there were calls that Obi should not be presented.
Sowore said he, alongside the Senior Advocate of Nigeria and activist, Femi Falana, rose to the occasion by taking legal steps to defend the LP.
“When the Labour Party ran into a problem. There was a member of the LP who insisted that the LP could not present the candidacy of Peter Obi. They had a legal problem. We went and obtain judgment in court; from the Court of Appeal, and handed it over to Falana to use it to defend the Labour Party, and by extension, Peter Obi’s candidacy. Yes! I’m just telling you that we’re in the business of saving people,” Sowore stated.
The pro-democracy campaigner also laid claims to how he purportedly rescued Obi from being impeached as a governor of Anambra State.
He said there were moves to “flush out Obi in Anambra State twice, Sahara Reporters saved the day. Falana on a daily basis will call me, saying: ‘I don’t know Peter Obi, but we should not allow this injustice to pass, nobody should be impeached,” saying that as of that time, “Obasanjo was impeaching everybody impeachable at that time in Nigeria. That was how Obi was able to complete two tenures. So when we speak, we know what we’re saying.”
“We are saying that we have been standing with the Nigerian people but we don’t have any sense of entitlement,” Sowore added.
The PUNCH reported that Sowore, alongside Falana, and a host of others stormed Lagos on Monday for the 13th memorial of Fawehinmi.
Sowore was returning to the state three years after he was arrested by the Department of State Service in 2019.
Chief Fawehinmi, until his death, was a Nigerian author, publisher, social critic, and politician. He is fondly remembered for his activism and defence of the common man in court pro bono.
Fwehinmi became a SAN in September 2001 and was awarded the Senior Advocate of Masses in Obafemi Awolowo University in 1988, among other international awards.
In the course of his activism, Fawehinmi was arrested and jailed serval times by successive governments under the military rule.
Others who were at the Monday programme included the Chairman, Centre for Anti-corruption and Open Leadership, Debo Adeniran; the General Secretary of the Federation of Informal Workers Organisation of Nigeria, Gbenga Komolafe and others.
The programme divided into three lectures was themed as follows: (1) A reflection of 23 years of electoral system and democracy in Nigeria; which way forward? (2) Fuel subsidy regime: Corruption in the oil industry and the way out. (3) Crisis in Nigeria educational system and indefinite strike action of the Academic Staff Union of Universities.
Top Stories