Outrage has continued to trail the detention of activist, Idara Godwin, popularly known as Idara Gold by the Nigerian secret police, Department of State Services (DSS). 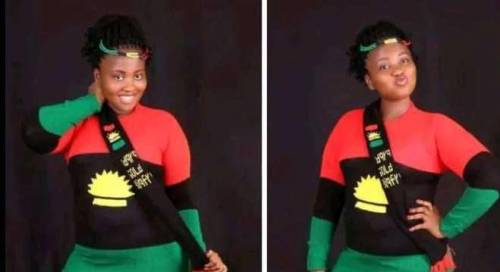 Very serious outrage has continued to trail the detention of Idara Godwin, a young activist who is popularly known as Idara Gold.

She has been detained for a long time by the Nigerian secret police, Department of State Services (DSS).

Idara Gold has been detained for 10 months without trial after she was arrested for wearing a Biafra-themed outfit.

SaharaReporters earlier reported that Idara Gold, a 20-year-old activist from Akwa Ibom State was unlawfully arrested and detained in Enugu by the DSS.

Her crime was wearing a Biafra-themed outfit, it was learnt.

According to reports, she was accosted by the Police on November 8, 2021, in Enugu. The policemen were said to have browsed through her phone.

"When they saw a picture she had posted online wearing a Biafran attire to celebrate her 20th birthday, she was arrested and handed over to DSS in Enugu from where she was transferred to DSS Headquarters, Abuja.

"Since November 8th, 2021 to this day, the DSS has denied her access to her lawyer, family and friends, and have not charged her with any offence," a human rights activist, Osimond Ugwu told SaharaReporters.

Ugwu stated that when her family approached an Abuja High Court seeking enforcement of her fundamental rights, DSS filed an affidavit, claiming that they had concluded their investigation into the matter in January 2022.

In the affidavit obtained by SaharaReporters, the DSS told the court that it had transferred her to a military barracks in Kainji, Niger State, in February and her case file had been transferred to the federal ministry of justice.

Meanwhile, Nigerian activists and some Twitter users have condemned the enforced disappearance of Nigerians and the high level of extrajudicial killings being carried out by Nigerian security agencies, especially the DSS, Nigeria military and police in Southern Nigeria.

A Twitter user with the handle @AfricanJesu, who shared details of how Idara Gold was arrested and her subsequent enforced disappearance, lamented that there is no freedom in Nigeria under President Muhammadu Buhari’s regime.

The user tweeted, "This is not just about Idara Gold but about all those who believe in justice and the rule of law.

"How can a 20-year-old girl be picked up in Enugu, transferred to Abuja, and denied access to her lawyer and family as stipulated by law?

"How can a young girl be kept in detention for over 300 days and not be charged or released? Even though investigation has concluded since January.

"How can a young girl be transferred from DSS custody to a military barracks for detention since February without word to anyone, even her family that have been asking DSS to see her?

“If the DSS can flagrantly act in such lawless way to Idara Gold, they can do the same to you. #FreeIdaraGold."

Another user, @PsalmsMalachy73 tweeted: "Injustice to one is injustice to all, Injustice anywhere is a threat to justice everywhere. Let us collectively raise our voice for the freedom of #IdaraGold. #FreeIdaraGold."

@UzorChukwu20 tweeted: "#FreeIdaraGold Twitter Campaign: Join @EmekaGift100 on Twitter now as we protest the abduction of this 19 years old girl who was abducted by Nigerian DSS for the past 8 months and kept incommunicado, denied access to lawyers and family.

"The Nigerian DSS also denied bringing her to court. We must bring her plight to the attention of the world and International media outlets."

Another Twitter user with the handle @Jimsamson22 wrote: "#IdaraGold was abducted by Nigeria DSS and kept incommunicado for almost a year without trail, No FAMILY or Even lawyer have been granted access to see her. No one knows if she is still alive, the 19 years #IdaraGold deserve unconditional release, #FreeIdaraGold @mfa_russia @UN."

Another Twitter user @Chia_gozie, wrote, "Her crime was only being passionate about freedom. Nigeria govt are agent of enslavement for the British. #FreeIdaraGold #FreeMaziNnamdiKanu #FreeBiafra.”

Meanwhile, a campaign calling for the immediate release of Idara Gold from custody has been launched on various social media platforms with #FreeIdaraGold.