the former Speaker of the House of Representatives, Yakubu Dogara, alongside some Christain leaders in the APC have continued to oppose the party’s same-faith ticket. 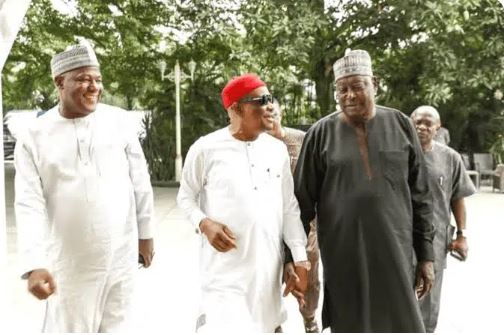 Former Speaker of the House of Representatives, Yakubu Dogara and ex-Secretary to the Government of the Federation (SGF), Babachir Lawal have been described as paperweight and irrelevant politicians looking for attention over their opposition to Muslim-Muslim ticket of the All Progressives Congress.

Both politicians are members of the APC and have consistently opposed their party's Muslim-Muslim ticket.

However, a top APC chieftain while speaking with Vanguard said the two politicians are irrelevant to the party.

Speaking with Vanguard on Tuesday, the APC leader who craved anonymity described Dogara and the former Secretary to the Government of the Federation (SGF), Babachir Lawal, as fifth columnists.
The politician said that Dogara and Lawal are paperweight politicians when it comes to Northern politics and the Christian community.
He said: “Dogara is a spent force. He was looking for the VP slot, as far as we are concerned, Dogara and Babachir Lawal just want to be noticed. Based on my understanding of how politics is played in the north, the likes of Dogara and Lawal are paperweight politicians as far as northern politics is concerned and also within the Christian community.
“During the last elections, what did they bring to the table from their various local governments? How many people can Babachir Lawal convince to vote for him in Adamawa State? How many people can Dogara convince to vote for others in Bauchi? Dogara is a minority in his state but in spite of that, Muslims supported him to become Speaker of the House of Representatives.
“They are fifth columnists as far as we are concerned. I see it as an attempt to demystify the myth around religious politics in Nigeria because an average Nigerian is not bothered about where you come from as long as you give him the basic needs. Look at the Vice President, how has his Vice Presidency benefitted any Christian in Nigeria?
“The thing is staring them in the face that Bola Tinubu will win in 2023 and that is why they are looking for a way to thwart his victory.”
Top Stories