An officer of the Lagos State Park Management Committee, led by Musiliu Akinsanya, aka MC Oluomo was seen forcefully pasting the campaign stickers on a resisting motorist. 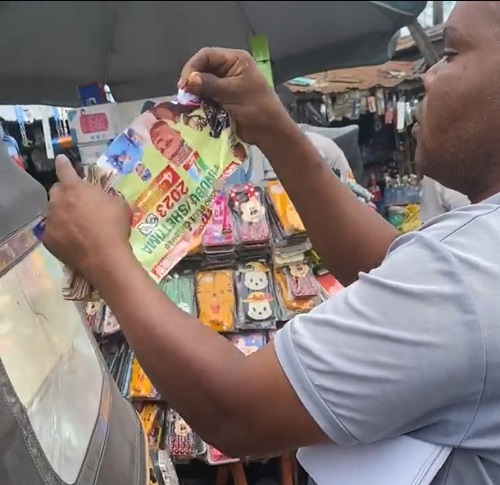 Commercial motorists and tricycle operators in Lagos have protested after being forced to buy campaign stickers of Bola Tinubu’s presidential campaign.
The stickers cost N500 each.
A video of the incident showed an officer of the Lagos State Park Management Committee, led by Musiliu Akinsanya, aka MC Oluomo, forcefully pasting the campaign stickers on a resisting motorist.
In the now viral video, the park management officer was seen harassing a motorist who refused to purchase the sticker. “You will have to meet the chairman (MC Oluomo) for questions,” the officer said while struggling with the motorist.
The video was posted by Human Rights campaigner Rinu Oduala, was titled, “Agbado boys seen forcing transport workers to pay #500 for Tinubu’s stickers in Lagos.”
Rinu says that Mr Tinubu’s self-acclaimed political structure is based on “criminality, tyranny and fraud.”
Her tweet read, “If they ask you about structure, this is the structure of criminality, tyranny and fraud they have in order to win elections.”
“It seems that this has actually been happening for months now.”
“You are already oppressed, yet they are forcefully collecting your money to come and further oppress you. Is this the Nigeria you want?
“This is how they plan to capture their “structures”. God help us,” Oduala tweeted.