Elated party chiefs and loyalists were at the Nnamdi Azikiwe International Airport in Abuja on Thursday to receive Tinubu. 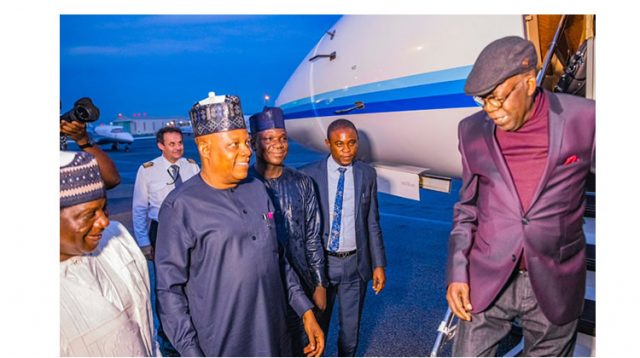 The presidential candidate of the All Progressives Congress, Asiwaju Bola Tinubu returned to Nigeria on Thursday night.
A video of him alighting from a plane at the Nnamdi Azikiwe International Airport in Abuja left supporters elated.
They were led by his running mate, Senator Kashim Shettima; and a former APC national chairman, Adams Oshiomhole, among others.
The former Lagos State governor is expected to host members of his Presidential Campaign Council, Progressive Governors Forum and the National Working Committee of the APC in separate meetings to discuss the contentious campaign list.
A former Minister of Communications and Director General of the Asiwaju Tinubu-Shettima Coalition for Good Governance, Adebayo Shittu, told The PUNCH that the wild jubilation that greeted Tinubu’s arrival was enough to make some people cover their faces in shame.
“They probably thought he won’t return to the country. I told you earlier he is coming today, didn’t I?
“Let us even assume he went for medical treatment abroad, should that be an issue? His fitness video and the eventual return have put an end to all their speculations,” he said.
Watch video below: