The striking university lecturers had yesterday expressed optimism that the intervention by the House of Representatives on its ongoing face-off with the Federal Government would yield desired results. 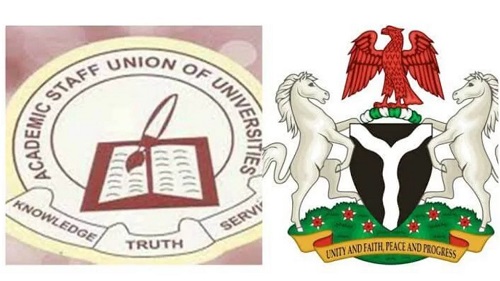 Following reports that the Academic Staff Union of Universities, ASUU, would be calling off its prolonged industrial action soon, students have expressed happiness over the news.
This comes after ASUU had said there is light at the end of the tunnel.
The President of ASUU, Prof Emmanuel Osodeke, who spoke when the Speaker of the House of Representatives, Femi Gbajabiamila, briefed the union in Abuja after meeting with President Muhammadu Buhari said, “For the first time, we have seen light at the end of the tunnel.”
ASUU shut down public universities in the country on February 14 to demand full implementation of agreements it had entered into with the Federal Government a few years ago.
FG had agreed to inject a total of N1.3 trillion into public universities, both state and federal, in six tranches, starting in 2013 after the union decried the deplorable state of the institutions.
In 2013, the government was, according to the agreement, said to have released N200 billion and promised to release N220 billion each year for another five years.
But after releasing the first tranche, the government stopped releasing the funds. In 2017, it, however, released N20 billion. In 2020, it promised to release N25 billion.
ASUU rejected the offer, insisting on N110 billion, which is 50 percent of the N220 billion that it demanded, but the government declined, citing a paucity of funds.
Recall that the Minister of Education, Mallam Adamu Adamu Adamu, had on August 22, 2022, claimed that the government had resolved most of the demands of ASUU.
Among the demands addressed, according to the Minister, was the release of N50 billion for the payment of earned allowances for universities’ academic and non-academic and non-academic staff.
The strike, however, lingered until the Federal Government dragged the union to the National Industrial Court, asking the court to order the lecturer back to class.
The National Industrial Court and the Court of Appeal had recently ruled that the lecturers must return to the classroom as negotiations continue.
Gbajabiamila, who waded into the crisis recently due to the plight of Nigerian students, said on Monday during the briefing that the 8-month-old strike would end “in matter of days.”
DAILY POST gathered that President Buhari would meet with ASUU stakeholders on Tuesday, after which the strike may be called off.
Some students who spoke with DAILY POST on Monday expressed joy that the prolonged strike is about to end.
Mary Adanu of the University of Abuja said she would have graduated from the University if not for the strike, saying she has spent more than five years for just a four-year course.
“I am happy that we will finally go back to school, at least after resumption, I will have the hope of graduating soon. Once you are a student in a public university, you automatically become a victim. Four years course is getting to six years”, she lamented.
Similarly, Victoria James lamented the time wasted at home for the past eight months, stating that the industrial action could jeopardize her destiny.
“If the strike is called off this week, I will be so happy because I need to go back to school in order to finish on time. I don’t have eternity to fulfill destiny,” she said.
Another student from the Benue State University, BSU, Onyeche Mathew, said, “Finally, God defeated the devil that said I should not graduate. I am already preparing for lectures because I know this can not be report as usual. We have heard from different sources, including ASUU, that the strike will end this week. I am so happy right now.
“My lecturer called me to confirm this. I have seen hell in the last few months. Lots of things went down but thank God for life. We will bounce back”.
Top Stories