According to the source, the rivalry between the two agencies may escalate to war if nothing is done by the authorities. 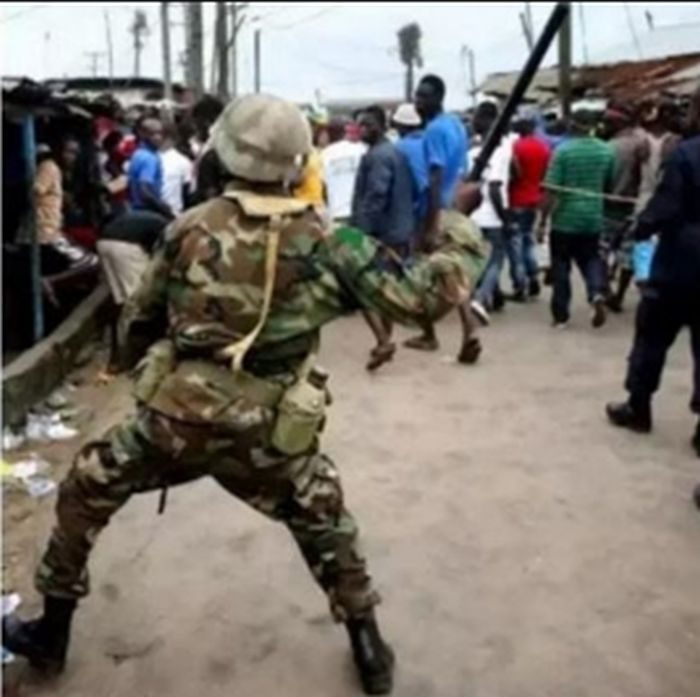 A fight has ensued between some police officers and soldiers in Zamfara state resulting in brutalization.
According to Sahara Reporters, there was tension in the camp of the Joint Security Task Force in Magami District, Gusau Local Government Area of Zamfara State over an alleged assault of a police Inspector by a Nigerian Army Major.
The joint security forces comprising mobile police and the military were posted to the community to fight against bandits and terrorists ravaging the state.
A source told SaharaReporters that the camp had witnessed multiple clashes between personnel of the two security agencies.
He added that a senior army officer identified as Major Falori recently assaulted and brutalised a police Inspector, Ismaila Abubakar.
According to the source, the rivalry between the two agencies may escalate to war if nothing is done by the authorities.
He accused the soldiers they were attached to of intimidation, harassment and segregation.
“An incident happened on October 4th, here in our camp in Zamfara, Magami village between mobile policemen and soldiers. Note, we are from 25 PMM but were attached to them to assist in this fight against bandits,” a source told SaharaReporters.
“But unfortunately, there is a lot of segregation, there is a lot of difference, they are making things not go well with us. They treat us badly, on that fateful day, the Major, one Falori came for visiting round check, there is a place we do pin down, so on that day, he went there to check the men, when he got there, he started abusing and hurling insult on everyone.
“So one of the Inspectors, Inspector Ismaila Abubakar replied and begged him to stop insulting us. He said we were performing all the work given to us, so why should he be insulting us all the time? Hearing this, the Major slapped him, gave him a blow and pushed him to the ground. That who is he to tell him not to insult us, that we are all animals and bloody civilians. Some soldiers within the area disarmed the Inspector and brutalised him.
“Presently, there is tension here, if nothing is done soon, there will be a serious fight between the soldiers and policemen in that camp. The Inspector-General of Police, Commissioner of Police in Zamfara and the AIG Mopol should be aware of what’s happening here. The soldiers they attached us to don’t like us, they do call us bloody civilians, that we don’t know anything. That we are useless just like civilians. Since they don’t like us, the police authorities should post us to where we can perform our duties very well.”
When contacted, Nigeria Police Force spokesperson, Muyiwa Adejobi, asked the officers should use the proper way of communication in the force to pass their grievances to the police authorities.
Adejobi also knocked SaharaReporters for always serving as mouthpiece to police personnel.
“It’s not everything that goes to the news, if they want to go to the news to solve their problem, let them go ahead. We are not aware, how would I react to something I don’t know. How will the IGP act on an issue he isn’t aware of?
“If soldiers and police have issues, is it the press that would solve it? If they have issues, let them use the proper way of communication, if they have reported to the CP of that state and nothing was done, they have component commander, if the component commander hasn’t done anything, let them inform the AIG in-charge of the place or AIG Federal Operations. What about the the DIG Federal Operations and the IGP. Until the IGP fails to address their matters, then they may say they want to call on the international community to help them.”
Calls put across by SaharaReporters to the Director, Army Public Relations, Onyema Nwachukwu were not picked nor returned.
Top Stories