The cryptocurrency, according to the Economic and Financial Crimes Commission (EFCC), belongs to one Alkali Naziru Tanimu, suspected of involvement in internet fraud, locally known as Yahoo Yahoo. 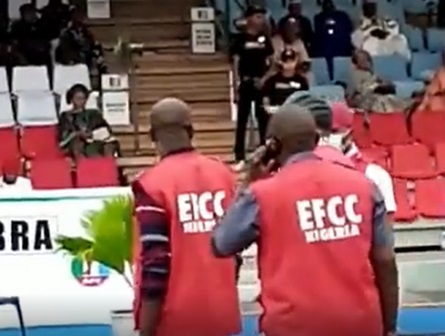 An internet fraudster aka yahoo boy has forfeited Bitcoin worth N40 million to the federal government.
This comes after the Federal High Court in Lagos ordered the forfeiture of 1.982, 022, 84 units of Bitcoin.
The cryptocurrency, according to the Economic and Financial Crimes Commission (EFCC), belongs to one Alkali Naziru Tanimu, suspected of involvement in internet fraud, locally known as Yahoo Yahoo.
Justice Nicholas Oweibo, who made the order, also forfeited to the government an iPhone 12 Pro Max; iPhone 7, and all funds found in account numbers 0301510085 and 2174982616, domiciled in Guaranty Trust Bank Plc and UBA Plc, respectively, said to belong to Tanimu.
The court on July 19, 2022, made an interim order of forfeiture of the listed items.
Justice Oweibo made the final forfeiture order on Friday, after hearing an application by EFCC counsel Sulaiman Sulaiman.
Sulaiman relied on Section 17 of the Advance Fee Fraud and Other Fraud Related Offences Act, 2006 and Section 44 (2)(B) of the 1999 Constitution (as Amended).
Sulaiman told the court the items were reasonably suspected to be proceeds of and acquired with proceeds of unlawful activity.
The EFCC, in an affidavit in support of the application deposed to by one of its investigators, John Daniel, of the Advanced Fee Fraud Section 1, Lagos Zonal Command, averred that his agency got credible intelligence about the activities of a syndicate of internet fraudsters operating at Eko Atlantic City in Lagos State.
A sting operation was carried out which led to Tanimu and others’ arrest, following which the items were recovered from him.
The deponent averred that the two phones were taken to the Forensic Laboratory where they were analyzed and fraudulent documents were printed out therefrom, which he duly endorsed.
He stated that a search was conducted in the name of the suspect and two bank accounts were traced to him, which sums in the said accounts are reasonably suspected to be proceeds of unlawful activities, adding that his team’s investigation suggested that the suspect was into dating scams where he poses as, and used the picture an Arab woman to defraud unsuspecting victims on the internet.
He alleged that the suspect had benefitted from his illicit activity to the tune of 1.98202284 units of Bitcoin, equivalent to N40m.
Top Stories