In a video, Evans denied involvement in the matter while being interrogated by residents. 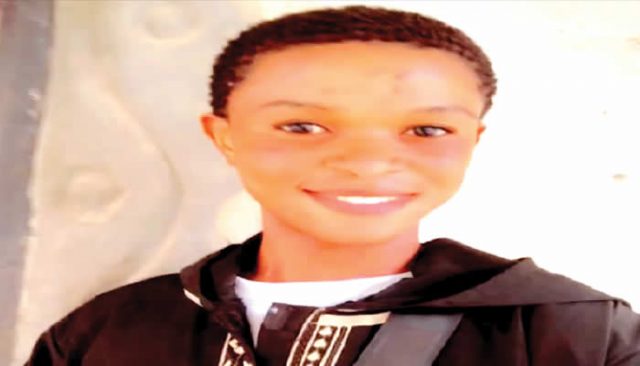 A 20-year-old student, Nureni Kekereowo has died after allegedly being used for money ritual by his two friends.
Punch reported that the Senior Secondary School 3 student was said to have died on October 12 after he indicated that his friends, whom he identified as Daniel, 19, and Sunday, another teenager, allegedly used him for a ritual.
Nureni, before his death, reportedly said the two friends invited him over for food, adding that after he ate the meal, he slept off.
He reportedly claimed that he woke up with a calabash on his head.
A resident, Olatunji Ajao, said the Epe, Lagos State indigene, was in pain while he narrated his ordeal, adding that he died the following day.
He said, “Nureni said his friends, Daniel and Sunday, called him to visit them, but he did not respond. When he eventually went, they gave him food. He said they put something on his head and that was how his neck became stiff and he could not turn it. He was in pain throughout the time he was unconscious till he died. The boys are not indigenes of this town; they are from Calabar, Cross River State.”
The victim’s relative, Atinuke, said the 20-year-old was unconscious when he was brought to her shop on Friday, October 7, 2022.
She said, “People said he was by the roadside and when they approached him, he directed them down here. Although he was unconscious when they brought him, I did not know that they had used him for rituals. I even thanked them for bringing him to me.
“It was on Saturday, October 8, that we discovered that he was still not feeling fine, as he could not talk. We took him to different places, including spiritualists, but we did not find a solution. On the night of Tuesday, October 11, we got someone who intervened. The person spoke to his ears and he started talking almost immediately. He said he went to Daniel’s house where he also met Sunday and they offered him bread and beans, after which he slept off. He said by the time he woke up, they had put a calabash on his head. He died the following morning after he said those things.”
The deceased sister’s husband, Hassan Arogundade, said Nureni’s statement led to the arrest of two of the culprits.
He said, “After he spoke on Tuesday night, we went to apprehend Daniel; we also discovered that Sunday had run away. Daniel took us to one Evans, whom he said was also involved. We went there and arrested him as well. We involved the police and they were taken to the Epe Police Station.”
In a video obtained by PUNCH Metro, Evans denied involvement in the matter while being interrogated by residents.
He said, “I went to Daniel’s house that day when I saw Nureni. He told me that his neck was paining him and that they placed something on his head. By the time he was about to leave, he fell at the doorstep. That was when Sunday, who was also there, carried him and took him away.”
The state Police Public Relations Officer, Benjamin Hundeyin, said he was not aware of the incident.
He said, “I have checked my records. I don’t have any report on it yet.”
But a police officer, who does not want to be identified, said the case was reported at the Epe Police Division as assault occasioning harm.
“Those people tried to go into money ritual and as a result, one person died. Two were brought to the station and one of them was badly injured,” the source added.
A professor of African Traditional Religion and Director, School of Part-Time Studies, Lagos State University, Ojo, Danoye Oguntola-Laguda, said what allegedly led to the victim’s death had no scientific basis.
He said, “It has a lot of metaphysical dimensions to it. You cannot just talk about putting a calabash on somebody’s head. What kind of calabash are we talking about? But for people who do not believe in African spirituality, they will tell you that a calabash cannot make anybody’s neck stiff, but the truth of the matter is that it is a possibility because the calabash you spoke about is not an ordinary one. It must have been laced with some spiritual condiments.
“The person who spoke to his ears could also be a spiritualist. In traditional African medication, the belief is that when you have the medication to cause an effect, somebody could also have a neutraliser that would neutralise the same effect that has been applied.
“Meanwhile, my argument has always been that there is nothing called money ritual. There are palliatives and fortification; there are things that can be given as incentives to people who are in business.”
Top Stories