The Federal High Court in Yola ruled Binani ceased to be the candidate and declared the APC has no candidate for the general election. 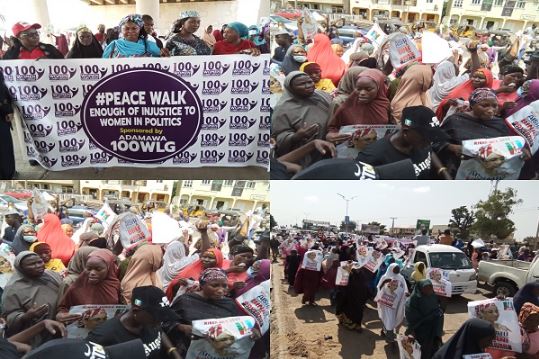 Some women in Adamawa State have staged a protest.

They staged a street walk around the capital, Yola, protesting last Friday’s ruling, which voided the governorship primary election of All Progressives Congress (APC) that produced Senator Aishatu Ahmed Binani as candidate.

The Federal High Court in Yola ruled Binani ceased to be the candidate and declared the APC has no candidate for the general election.

The Court, after deliberations on a case filed by Binani’s opponent in the primary election, Nuhu Ribadu, ruled the primary was conducted in substantial noncompliance with relevant rules.

Reacting to the court ruling on Wednesday, women from across the state gathered in Yola and marched through the streets, insisting that the ruling was part of a grand conspiracy against women.

The protesters chanted: “It’s Binani we want”; “No Binani, No Election”; “There is no country without Women”;”The conspiracy against women is too much.”

The women who walked through some major streets and visited the APC Secretariat in Jimeta, addressed newsmen where their leader, Hon Comfort Ezra, asked all women to stand up for Binani.

Ezra said: “We call you here today to vehemently kick against marginalisation of women in the political space, especially by political parties who tend to deliberately put obstacles on the path of the female gender during their primary elections.

“The recent court judgement by the Federal High Court which refused to uphold the election of the only female governorship candidate in Nigeria for the 2023 general election, Senator Aishatu Dahiru Ahmed Binani of APC, is a wake-up call to all women in Nigeria and not Adamawa State alone. We call on all women across the country to ensure that she is not ripped of her mandate through technicalities.”

She said that after polling 430 votes to beat five other contenders, all of them men, for the APC governorship ticket, Binani must have rattled the menfolk in APC and other parties.

“The technicality of seeking to refuse her the ticket through the courts is a deliberate effort by the male gender to stop the womenfolk from leadership positions and we consider it an affront on all women,” she said.

Our correspondent recalls Binani’s closest rival in the Adamawa APC governorship primary, Nuhu Ribadu, had polled 288 while the immediate past governor of the state, Jibrillla Bindow came next with 103 votes.

House of Representatives member, Hon Abdulrazak Namdas polled 94 votes while a less known contender, Engr Umar Mustapha got 39 votes with a former state secretary of the party, Wafari Theman bringing up the rear with 21 votes.

Ezra said women did not know why the men whom Binani defeated with a wide margin would not display sportsmanship and accept the Verdict of the people but would “seek to use the courts to upturn the mandate popularly and transparently entrusted to Senator Binani.”