This is occasioned by the mountains of refuse which have blocked all streets and gutters in the Calabar South area. 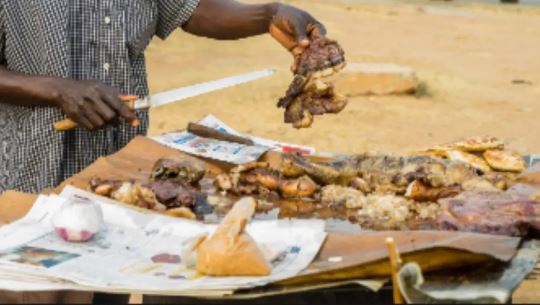 The people who are fond of eating roadside meat have been issued with a warning, Daily Post reports.

People patronizing pork and other types of meatballs, fried plantains and roasted fish have been warned to desist from it.

Residents have also been advised to restrain themselves from patronising food hawkers.

This is occasioned by the mountains of refuse which have blocked all streets and gutters in the Calabar South area.

Following this, there have been reports that increasing numbers of children have been admitted in several hospitals and two toddlers may have died from suspected cholera epidemic in private facilities, according to radio callers.

An environmental health technician, John Atu, who was a guest on a radio call-in programme, warned that it was very dangerous for people to eat meats or fast foods sold by the gutters and roadsides as heaps of refuse are all over the streets in Calabar, attracting pests and flies.

“I want to seriously warn that people who are fond of eating from the roadsides should immediately desist.

“Flies of all sorts have been attracted by the heaps of wastes which have blocked all streets in Calabar for more than three months now.

“These flies are feasting on these wastes from where they perch on nearby foods and meats sold at roadsides.

“We have increasing reports about possible outbreaks of cholera which have affected children and adults. Many children are in very critical conditions in some hospitals as a result of suspected cholera,” he said.

Two of the radio callers were very angry at how sanitary condition of Calabar had degenerated.

Mma Obio Oko and iyamba Cobham blamed the authorities who they said have allowed the once serene and clean Efikland which prided herself as the cleanest in the county to become a refuse city.

“We, the Efiks, were nicknamed White men because of our neatness and clean environment. But today, the authorities have desecrated this status.

“Our city is now very dirty unlike before. Refuse has taken over every part of our famous city. Flies and stench are attacking the residents”, Cobham said.

Mma Obio Oko invited the governor, Prof Ben Ayade to take a walk into the Calabar South, and not to confine himself in the governor’s office and lodges.

An official of the State’s Waste Management Agency, who did not want his name mentioned, lamented that the State does not have dump sites.

“The old dump site at Lemma community in Calabar North has completely been filled up. The other place in Calabar South is too small to receive the amounts of wastes generated in Calabar on a daily basis.

“We await the government to help us designate another place for wastes”, he appealed.

Before now, the complaint of the Agency was that they had only one waste truck, which incessantly broke down.