According to the youths, the collapse of the road, a major link road to other communities, had made life unbearable for the people. 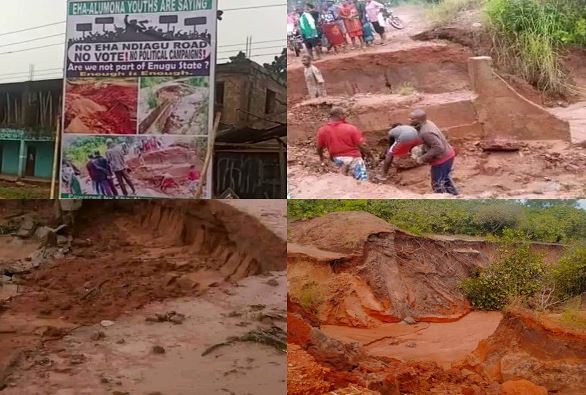 Political campaigns, rallies and meetings have been banned by Youths of Eha-Alumona community in Nsukka Local Council of Enugu State until the State Government fixes the deplorable roads in the community.

The youths also announced N50,000 fine on any member of the community found to be participating in politics, while asking the State Government to declare a state of emergency on the Eha-ulo/Eha-Etiti/Eha-Ndiagu/Mbu road.

In a communiqué at the end of their meeting on Sunday, Eha-Alumona Youths Association (EYA) stated that the action became necessary following the total collapse of a section of Eha-ulo/Eha-Ndiagu/Mbu/Agu-Umabor/Umabor Ring-road.

According to the youths, the collapse of the road, a major link road to other communities, had made life unbearable for the people.

They stated that they had made several representations to the state government for the repair of the road, to no avail, stressing that they took the decision as the last resort.

“Eha-Alumona youths shall speak with one voice come 2023 and, at the appropriate time, the association will take a position on whom to vote for come 2023 general election.

“Police harassment and brutality in our town shall henceforth be seen as a declaration of war on our town and shall be resisted with the last drop of our blood.

“Individuals and groups dubiously hiding under the umbrella of Eha-Alumona town to gain favour from the state government at the expense of our collective welfare should henceforth cease from such act,” the communiqué warned.